An Ohio native, Alison Lockwood studied journalism and creative writing at Wittenberg University. After a brief stint as a reporter, she became an editor for Harcourt Brace Publishers and later, a travel writer and photographer for AAA Publishing. Her first novel, THE ARSONIST’S LAST WORDS, was named one of the Best Books of 2013 by Kirkus Reviews. 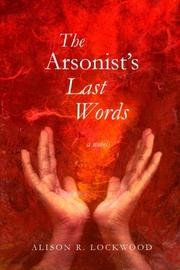 An elegiac novel that deftly combines elements of investigative journalism and crime fiction.

This debut effort follows the morally wrenching aftermath of a major urban catastrophe in a way that’s eerily evocative of the 9/11 attacks. A massive fire consumes the Parramore Plaza in Orlando, Fla., killing 115 people and emotionally scarring untold more. Marko Abissi, a recently fired janitor, immediately falls under suspicion, as he all too perfectly fits the profile of an arsonist: He has a history of violence and a personal life crumbling into disarray. There are also rumors that he has ties to the Middle East. Juni Bruner, a grizzled veteran reporter, tirelessly investigates every lead, desperately trying to make sense of the despairingly senseless. The book’s startlingly innovative structure powerfully captures the city’s madness in response to the disaster. Instead of a traditional novel told from a single perspective, the book is more like a heap of archival documents—including newspaper articles, personal correspondence, transcripts of telephone conversations and even a worker’s compensation report. The reader becomes a proactive participant in the investigation, poring over the dark mystery’s disjointed evidence. From the outset, the novel reveals that Bruner won a Pulitzer Prize for her ace reportage and that she ultimately took her own life, leaving only a 200-page manuscript as a clue to her inconsolable sadness. Her spiraling descent mirrors the city’s frenzied chaos, its people numbed by depression and enlivened by the urgency to assign blame. Although the climax is fairly predictable early on, it’s still a poignant conclusion to a stirring tale. It’s a testament to the author’s skill that the narrative remains a seamless whole, even as it unfolds in fractured parts.

A moving parable about the wounding effects of human tragedy and the collateral damage of the search for moral truth.