Allan Batchelder is a professional actor, educator and former stand-up comedian. He has performed all over the United States, and his work reflects a lifetime in the theater, as well as an abiding interest in literature and especially fantasy. The central character in his current series -- now three books of a planned five -- draws inspiration from Odysseus, Beowulf, Conan, Elric, Hotspur and more. In addition to Shakespeare, Allan's favorite authors include Steven Erikson, Joe Abercrombie, Tad Williams, Glenn Cook, George R. R. Martin, J.R.R. Tolkien, R. Scott Bakker, Michael Connelly, and Steven King. His favorite television shows are Vikings, Game of Thrones, Penny Dreadful, House, and the X-Files. As you can see, he has little use for reality, although he's quite happy with his life and family. Allan holds a Master of Fine Arts in Acting from the National Theater Conservatory and a Master's in Teaching from Seattle Pacific University. In addition to his novels, he has written dialogue for computer games and industrial films, screenplays, plays and greeting card sentiments. 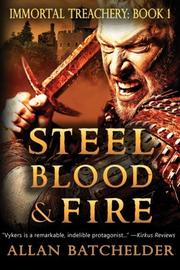 Humans and mystical creatures band together to stop an evil sorcerer in Batchelder’s debut, the first in a fantasy series.

Tarmun Vykers is a notorious warrior called The Reaper. He’s mercilessly beaten by men and left in the forest with his hands and feet severed. He finds an unlikely rescuer in Arune, the ghost of a being (called a Shaper) capable of magic. Vykers agrees to share his body with Arune in exchange for his extremities—even if they’re invisible. Before he can return to full strength, he’s captured by the Virgin Queen’s men. The Queen, despite being the one who ordered Vykers’ mutilation, needs the warrior’s help. A powerful sorcerer calling himself The End-of-All-Things is decimating the land and its people, and the Queen wants Vykers to halt the End’s advance. Aoife, meanwhile, seeks vengeance against her brother Anders (aka the End). One of the magical A’Shea, Aoife gives birth to beasts of the forest, such as a satyr, all of whom will soon join the fight against her wicked brother. Numerous prolonged journeys occur before the impending battle. But Batchelder maintains impressive momentum with short scenes, switching between, for example, Vykers and Long Pete, who, along with friends, joins the Queen’s military. There’s likewise distinction among the plethora of characters: Arune’s merely a voice in Vykers’ head but offers sage advice and takes over if necessary (rendering the warrior unconscious to avoid a fight he’d likely lose); and Spirk, one of Long’s traveling companions, clearly functions as comic relief. The fantasy treks through mostly familiar terrain, including magical swords and chimeras that fight alongside Vykers. But there are original creatures too, like the Svarren, which are misshapen, wart-covered humanoid beings. The plot, not surprisingly, entails a hefty amount of action, especially once it reaches the inevitable conflict between the End’s and the Queen’s armies. Intrigue, however, abounds when swords aren’t clashing: the chimeras may be untrustworthy, while at least one character is not what he or she seems. Vykers is a remarkable, indelible protagonist, an antihero as equally lethal as the End.

A world most readers will already know but a story told with affection and skill.

As Flies to Wanton Boys

You are Tarmun Vykers, the Reaper, laid low by a sorcerous wound and languishing in a sick bed for years until your services are unexpectedly required again, and the means to get you back on your feet rather conveniently appears in the person of Her Majesty’s first mage… Cindor, the kingdom’s most experienced wizard and a skilled politician. Can you trust him, and what is the price for his help? And what of the beautiful healer, Aoife, who insists on accompanying you on Cindor’s quest? Surely, she’s not as emotionally aloof as she pretends, and, if not, what is she hiding? Long Pete, too, is caught up in Cindor’s web. The wizard has plans for Long and his crew that may save the kingdom, but tear friendships asunder. Ride with the half-crippled Reaper again, as he crosses a monster-filled sea and a dark and threatening continent to engage in the most unusual battle of his life and uncover an unthinkable secret.
Published: Dec. 27, 2013
ISBN: B00HMBFC1M

Betrayed by his closest friend, someone who has also stolen his most precious possession, Tarmun Vykers wants revenge. Kittins wants revenge, too, against the all-powerful Queen, who’s been manipulating and dictating his every move for far too long, to devastating effect. Long Pete wants revenge against the slavers who murdered his wife and even now hold his only child captive. And many others too numerous to count want revenge as well, for slights both real and imagined. One thing is certain: punishment is coming. Follow the Reaper again, as he fights through the worst winter in ages to deal out revenge that leaves his victims corpse cold.