Following his internship and internal medicine residency, Dr. Malnak served as chief of internal medicine at U.S. Army Hospital, Fort Sill, OK, and then was a clinical investigator in liver disease at Mount Sinai Hospital, Chicago. He was a board-certified internist in the Chicago area for more than 35 years. He was a clinical instructor at Chicago Medical School for eight years and an assistant clinical professor at the Stritch School of Medicine of Loyola University for 25 years. Dr. Malnak was medical director of a number of medical organizations, including Principle Health Care of Illinois and the emergency department of Chicago’s Mount Sinai Hospital. His interest in the Holocaust was sparked by the fact that his father came to the USA from Lithuania at age 16, leaving behind a large family. All the men, women and children of that family were sent to a death camp by the Nazis and exterminated. He lives in Florida with his wife Patricia.

“The thriller market seems increasingly saturated by books that fail to thrill, so Malnak's debut is a nice surprise.”
– Kirkus Reviews 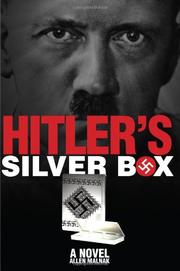 In Malnak’s international thriller, a cadre of neo-Nazis wants to keep the fires of war raging with the secrets of the Thousand-Year Reich—and only a beautiful Israeli operative and the nephew of a concentration camp survivor can stop them.

The thriller market seems increasingly saturated by books that fail to thrill, so Malnak’s debut is a nice surprise. The author doesn’t have the depth or breadth of a Daniel Silva, but he mines similar terrain with enough compelling aplomb to keep the pages turning. In Malnak’s case, the primary attraction is Miriam Horowitz, a sort of Le Femme Gabriel Allon, who encounters protagonist Dr. Bruce Starkman after his “Hail Mary” at the Holocaust Museum. A titleless operative attached to the Israeli Embassy in Paris, the remarkably adept (and fetching) attaché happens to be related to the man who helped keep Starkman’s uncle, Max, alive in the Theresienstadt concentration camp during World War II. After Max’s mysterious death compels Starkman to ask questions, Horowitz’s fearlessness gets the answers—and helps keep them one step ahead of the coterie of neo-Nazis who are intent on getting their mitts on the Silver Box, which contained the secrets for the Third Reich’s Thousand-Year Reign and had been destined for Der Führer himself. The harrowing chase begins in Starkman’s native Chicago and doesn’t stop until everyone reaches the former Czechoslovakia. There’s murder and mayhem and triple-crosses, and a rat-a-tat series of close calls. The characters are a little too broadly drawn, the history is a little too swiftly written and there’s not nearly enough nuance, but given a little more depth and breadth, and an encouraging edit, Malnak’s book could race alongside the bestsellers of the genre.

Cross The Spear of Destiny with Daniel Silva and you’ll come close to Malnak’s swift but unpolished thriller.

Putting the reader into the story.