In his “Memories from a War” Aloysius Pappert writes movingly of his coming of age in Germany under the harsh dictatorship of the Nazi party and of his often horrendous journey through the inferno of World War II.
Born into a tight-knit Catholic family he was imbued with the high moral values of his Church, never losing faith in God?s guidance even in the most challenging times of utter disasters. It gave him the strength for his irreproachable conduct in the depth of the war as a young Wehrmacht officer, maintaining a deep sense of decency and humanity even under the most trying circumstances of a senseless war. All along he never failed in his efforts to do everything possible for the safety and survival of the soldiers under his command. The mayor of the last town Pappert was defending against the Red Army said to him: “I am so impressed with your command of the situation, with your wisdom in making your decisions and your concern for your soldiers and for us.”
Returning to his family in devastated post-war Germany after the most abject treatment in Russia's notorious prisoner of war camps he became highly successful in business. He now lives in Monaco, still deeply in love with his wife Isabelle, recently having celebrated their sixtieth wedding anniversary. He continues to be very active in many civic and charitable organizations and is never afraid to profess his unshakable Catholic faith.

““........this is a beautifully crafted remembrance that depicts an underrepresented perspective. An arresting and unusual portal into the mind of a fighter in the Nazi forces.””
– Kirkus Reviews 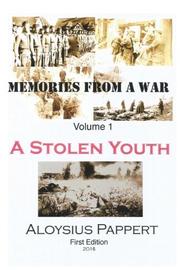 Memories from a War

Recollections of World War II are usually told from the side of the victors, often Americans detailing their heroic triumph over a barbaric adversary. Pappert, however, served in the German Wehrmacht and fought against the Allied forces, an experience that provided him with a unique vantage point from which to parse the violence and chaos. The author’s father was a staunch and prominent Christian as well as a principled critic of Nazi tyranny. As a result, Pappert’s eyes were opened wide to the depths of Hitler’s depravity, and he found solace in a faith outlawed by Nazi ideology. In 1942, the author was compelled to join the RAD, essentially a national labor service, as a prelude to his induction into the military at the young age of 18. After working as a “war reporter,” a job that relieved him of more tedious manual labor, Pappert was eventually sent to France, Clermont-Ferrand in particular, and was hypnotized by the beauty of the country, including the magnificence of Paris. (The book is translated from French into English.) He lived in constant peril—one day he was shot in the neck from a sniper in a tower, though thankfully the wound turned out to be a minor one. Later, he was nearly killed by grapes poisoned by the French Resistance. The author also constantly feared the Gestapo, who zealously scrutinized even its most decorated soldiers. In a stroke of luck, he was chosen to decamp for Italy rather than the much more dangerous Eastern front, though he knew this only delayed a terrifying encounter with the much more powerful American military. Pappert’s prose is by turns charmingly humble and affecting. He was riven with internal conflict—a devoted Roman Catholic who despised the Nazis, he still considered it wrong to show disloyalty to his own nation at war. At one point, he was given the chance to flee and join the French Resistance, and he demurred: “I am a German soldier and while I detest the Nazis that does not mean that I would betray my country. Even if I did, the Resistance would always look at me askance, a deserter who cannot be trusted. I cannot accept your proposal.” The first of two volumes, this is a beautifully crafted remembrance that depicts an underrepresented perspective.

An arresting and unusual portal into the mind of a fighter in the Nazi forces. 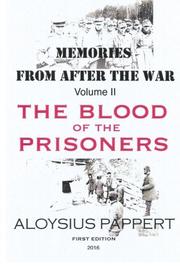 Memories from after the War

Pappert (Memories from After the War: A Stolen Youth, 2016), a German soldier during World War II, suffers but perseveres as an inmate in a Russian prison camp in this memoir.

Even though the war had ended by 1945, Pappert, a lieutenant in the German army, was still in great danger as he tried to navigate his men through hostile Czech territory and find American troops to whom they could surrender. However, the Russians, who were well-known for their brutality toward prisoners of war, eventually captured them but promised that they would transport the Germans by train into American custody. Pappert knew this was unlikely and had no choice but to consider the risky prospect of escape. However, he couldn’t find anyone inside or outside the camp to collaborate with him, so he resigned himself to his fate—an exhausting march to an overcrowded train permeated by the stench of excrement and death. Eventually, he and his men were deposited at a Russian POW camp and subjected to grueling work in mines; he sustained himself with meager rations of soup and bread, which his captors sometimes withheld as punishment. Despite being only 20 years old, Pappert was an officer, and he became both a leader and an inspiration to his men. He writes that he found both strength and solace in his unwavering Catholic faith and often tutored his fellow prisoners in prayer. Still, he admits that such bleak conditions can eventually undermine any man’s morale: “Deprived of our meager evening meal, living for weeks in this camp of terror made us into human beings that no longer really existed.” Overall, this is an affecting tale, written in a spare prose style that avoids gratuitous sentimentality. Although it’s a sequel to Pappert’s previous book, it offers a self-contained story that can be read on its own. The author’s perspective—that of a German soldier who was never committed to Nazism, but believed in a “new Germany, the Germany of Goethe, Lessing and Kant”—is a rare one, and one may wish that he’d elaborated on this particular point. However, it’s a minor quibble in an extraordinary historical record.

A gripping story of overcoming adversity.