Alvando Dion Ray was born on July 20, 1973 in Houston, Texas. He has 6 published works and more on the way. He loves to illuminate while entertaining in his
writings. He was married on 9/29/2018 and looking forward to new and exciting chapters in his life. Alvando's titles include urban fiction, mystery thrillers, spiritual, non-fiction, as well as science fiction. He is the pastor of a newly formed church (Spirit of Hope Tabernacle). 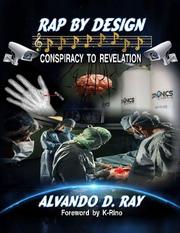 Ray (Kecia’s Secret: Revised, 2017, etc.) delivers a sci-fi novel about a murderous quest for control in the world of big business.

In the opening pages of this loose, paranoid tale, a number of businesspeople attend a meeting in New York City. Although the purpose of the gathering is vague, it’s clearly not a social event; those assembled “could care less about each other, it was all about accumulating more wealth.” Later, they come up with a plan to murder an as-yet-undiscovered lyricist and steal his or her brain. The victim, they say, must be “more than a poet, more than a rapper, with a limitless imagination,” and once the brain is in their possession, they plan to connect it to a computer for sinister purposes. Meanwhile, all over the world, people are willingly being implanted with radio-frequency identification chips—an action that the first-person omniscient narrator says will “be their doom,” although the reasons why aren’t immediately clear. What is clear, though, is that those in control seek to tighten their grip on the population through ever-evolving means. Is there any room for hope in a world that relinquishes more and more of its freedom to technology? The story waxes on a wide range of subjects, from cryogenics to police shootings to cloning, as it ruminates on current and near-future events. Along the way, this brief book maintains a free-wheeling and meandering style. The plot gets a bit thin at times, and the characters tend to be flat and underdeveloped (such as the ever-greedy businessman Jack Sloan). That said, Ray is at his best when he’s examining his story’s strangest and most conspiratorial elements. He also entertains its sci-fi concepts briefly enough that they don’t become tiresome, such as the fact that any present-day civilian can travel to outer space—as long as they have enough money. His economical style allows the book to move freely and pointedly toward his broader theme that “there seem to be no limits to the unthinkable acts that mankind conjures up.” Indeed, the story’s ending is indisputably fantastical.

A creative and brisk meditation on a tech-obsessed society.

FROM HELL TO HOLINESS

A mulatto girl targeted for death since birth, who overcomes many evil obstacles to head in the direction to fulfill her destiny.
Published: Nov. 14, 2016
ISBN: 9781540424518

THE CALL OF THE DAUGHTERS OF ZION