ALYSSA PETERSEL graduated from Northwestern University in 2013 with dual BA degrees in psychology and international studies. Alyssa was awarded the Northwestern Public Interest Fellowship in 2013, through which she worked in research, community building, policy and advocacy at Strengthening Chicago’s Youth (SCY), a violence prevention collaborative convened by Ann & Robert H. Lurie Children’s Hospital of Chicago. Alyssa raised $12,000 via Kickstarter crowdfunding to fuel her debut nonfiction anthology, Somehow I Am Different. Released in March, 2016, Somehow I Am Different won first place in the Biography/Autobiography section of the New York Book Festival, earned a starred Kirkus Review, and has been featured as Kirkus' Indie Book of the Month for July 2016. Alyssa now studies social work at New York University and nonfiction writing at the CUNY Graduate Center Writer's Institute, is a participating author in the 2016-2017 Jewish Book Council Network, and lives in Brooklyn, New York.

“A journey through the lives of young Eastern European Jews that's not to be missed.”
– Kirkus Reviews 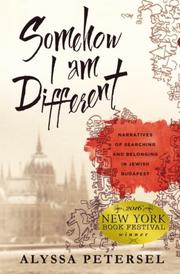 Somehow I Am Different

Petersel’s debut explores the revitalization of the Hungarian Jewish community in 21 oral histories of millennial Jews.

Young Hungarians in cafes, synagogues, festivals, and conferences tell of their Jewish religious and cultural identities in this work. They include an Orthodox rabbi, a chef, a rapper, children of Holocaust survivors, a non-Jew with an anti-Semitic past considering conversion, and others, and their diverse personal and work histories result in multifaceted tales. Each person’s story demonstrates his or her winding path to embracing Judaism, whether it be in a historical context or in present-day Hungary. Some interviewees see a primary need to educate people about the Holocaust and anti-Semitism; others want to dispel images of Jews as victims and let the world know about the currently thriving Hungarian Jewish culture. Asuzsanna Fritz, who was unaware that she was Jewish until she was 16, explains, “we decided that we could create a positive Jewish identification. We created an open door and said whoever wants to come, we are happy to receive you.” Such visions of flourishing communities are tempered, though, by the recent rise of the right wing; the country is “becoming more and more nationalistic and conservative…more and more excluding toward minorities,” says one young adult. “The question is: Do I want to live in a country where the main tendency and the main values are not what I believe in?...I don’t have a clear answer for that.” With deft prose, Petersel seamlessly weaves together Jewish voices with evocative descriptions of the sights, sounds, and smells of her Hungarian surroundings. Her depictions of food, for example, induce pangs of hunger: “spicy mushrooms ignited my palate and my sinuses. Hints of sharp cheese mixed with the comfort of potatoes in the French stew.” An epilogue features excerpts of Petersel’s own journal and a contributed essay by Ákos Keller-Alánt on Hungary’s contemporary history, politics, and economy, which adds an important component to the work. Although the book focuses on Hungarian Jewish life, its historical context, provocative questions about identity and culture, and captivating writing will engage and educate a very broad audience.

A journey through the lives of young Eastern European Jews that’s not to be missed.

Somehow I Am Different: NARRATIVES OF SEARCHING AND BELONGING IN JEWISH BUDAPEST: Kirkus Star

Somehow I Am Different: NARRATIVES OF SEARCHING AND BELONGING IN JEWISH BUDAPEST: Named to <i>Kirkus Reviews'</i> Best Books, 2016

Somehow I Am Different: NARRATIVES OF SEARCHING AND BELONGING IN JEWISH BUDAPEST: Kirkus Indie Book of the Month - July 2016, 2016