I'm a former broadcast journalist who has covered both sports and news during my career. (That's how I met my husband, Jim Thome; I interviewed him on opening day of the MLB season in 1995, and the rest is history.) We have a fifteen-year-old daughter, a ten-year-old son, and two cats who are spoiled rotten. I temporarily retired when we had our children, so I could be home with them full-time while they were still young. The loss of my mom almost three years ago was the catalyst for me starting to explore my writing career, which still allows me to remain home with my family. My mom was a writer and poet, and I can't help feeling that she's always near, watching over me proudly. In my spare time, I love photography and travel, preferably at the same time. My novels are inspired by favorite places I've been, each of which have left vivid footprints on my imagination. I believe a book can be steamy and sexy, while still keeping it classy. I also love to infuse my characters with great senses of humor. The first two books in my Hesse Creek Series, Walland and Seeds of Intention, are available now everywhere books are sold. The third and final book in the series, House of Belonging, will be released on June 5, 2018. I'm currently working on a brand new three-book series, set in the Pacific Northwest. I really love to interact with my readers on social media and in person. You can connect with me via my website, www.andreathome.com.

“In her debut novel, author Thome writes with a winning charm and peppers her prose with a quirky wit...an enjoyably readable love story.”
– Kirkus Reviews 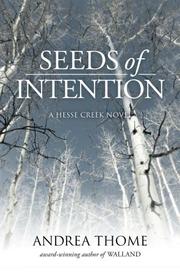 In this love story, a man and a woman find solace from heartache in each other.

Garrett Oliver lands his dream job, working at a resort in the Smoky Mountains of Tennessee as a gardener, apprenticing under Finn Janssen, a master of his craft. Garrett’s been separated for months from his college girlfriend, Lindsay, who remains in school in Washington State, a distance that has taken its toll on their relationship. She eventually arrives in Tennessee for a short visit. But in response to his marriage proposal, she breaks up with him and quickly returns to Washington. Willow Armstrong, the recently hired general manager of the resort, overhears Lindsay on the phone speaking to what sounds like her new lover, evidence that she had already begun a relationship before leaving Garrett. Garrett is crestfallen but also immediately attracted to Willow, who experiences the same intense feelings. Meanwhile, Willow has her own reasons for romantic caution—she proposed to her own boyfriend, only to be rejected in favor of another woman. And she moved back to Tennessee to care for her increasingly ill father, an executive for a company that owns a hotel chain. Soon her life becomes even more complicated. After her father dies, she suddenly discovers that he was a multimillionaire. But she might not be his sole heir—a man steps forward who believes Willow’s father was also his own, with his birth the result of an affair. This is the second installment in Thome’s (Walland, 2016) Hesse Creek series, and it’s just as easy and pleasurable to read as its predecessor. While this sweet book revolves around the same resort and cast of characters for the most part, its enjoyment doesn’t presuppose knowledge of the series opener. The author repeats the fictional formula of her first novel as well—a relationship forged out of a powerful magnetism and shared grief—and yet again manages a mostly lighthearted mélange of tender love story and thoughtfully depicted trauma. But the plot in this volume is now too cluttered and less likely—it’s hard to imagine a woman growing up without a clue that her father was lavishly wealthy.

An effortlessly romantic read, if a bit implausible. 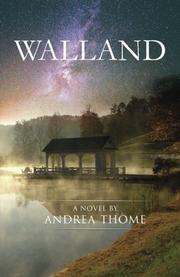 A tender, romantic novel about two wounded souls who find each other and ponder the risk of trying to love again.

India Evans is a reporter and anchorwoman for NBC’s Today show, filmed in New York City. She’s set to marry Jack Sterling, a dashing meteorologist at a rival network, and the highly publicized celebrity union is sure to advance her career. But India is plagued by doubt, and when she realizes that she doesn’t truly love Jack, she cancels the wedding. Her ratings plunge and her superiors strongly suggest that she take a hiatus from work. India plans a respite at Blackberry Farm in Walland, Tennessee—a gorgeous, bucolic resort that’s a short drive from Knoxville. There, she meets Wyatt Hinch, a freelance photographer, and she’s immediately drawn to him, finding his combination of rugged good looks and easy kindness irresistible. But he has his own reasons to be wary of love: he lost both his parents in a car crash when he was 15 and later lost his wife to illness. To further complicate matters, he and India unexpectedly encounter Jack at a special dinner hosted by a celebrity chef—Jack’s new girlfriend. During the event, Jack plants seeds of doubt in Wyatt’s mind about his new relationship. As Wyatt and India’s affair becomes more serious, they must make hard decisions about the courses of their lives. In her debut novel, author Thome writes with a winning charm and peppers her prose with a quirky wit: “Wyatt cranked up the music on his iPod….Eminem informed him that he only had one shot, and that this opportunity comes once in a lifetime.” Along the way, she realistically depicts the pain of profound loss, and the fear of vulnerability that such trauma can conjure. The plot itself doesn’t break any new ground, as it’s essentially a variation on well-worn themes, but Thome develops it with a companionable mix of sweetness and drama.

The Invention of Wings