Andrew Demcak* is an American poet and novelist, the author of four poetry collections and five Young Adult novels. His books have been featured by The American Library Association, Verse Daily, The Lambda Literary Foundation, The Best American Poetry, and Poets and Writers. He was a *FINALIST* for the prestigious Dorset Poetry Prize, the Gloria E. Anzaldúa Poetry Prize, and the Louise Bogan Award for Artistic Merit and Excellence in Poetry. He recently released two new YA/Teen GLBTQ2-S novels, How Do You Deal with a Dead Girl? (Big 23 Press, 2018) which Kirkus Reviews called "An eerily amusing horror tale that will have readers rooting for the characters," and Alpha Wave, The Elusive Spark series, Book 2, (Harmony Ink Press, 2018). His newest YA/Teen GLBTQ2-S novel, Darkfeather, The Elusive Spark series, Book 3, (Harmony Ink Press, 2019) will be published next year. About his Teen GLBTQ Sci-Fi Coming-Out novel, A Little Bit Langston, The Elusive Spark series, Book 1, Kirkus Reviews raved "This book really ... takes its place in the marginalized-will-lead-us genre, as popularized by The Matrix and the X-Men franchises." His first Young Adult (YA) novel, Ghost Songs, was published March 13, 2014. His first literary novel, If There's A Heaven Above, was published January 5, 2013 by JMS Books, and was nominated by The American Library Association as an "Outstanding" novel for older Teens (17+). His first play, The Inevitable Crunch Factor, won the Cal Arts' New Playwrights Series and was cast and produced in a multi-week run. His fourth book of poetry, Night Chant, was published by Lethe Press. His other poetry books are: A Single Hurt Color, GOSS 183::Casa Menendez Press, 2010, Zero Summer, BlazeVOX [Books], NY, 2009 and his first poetry book, Catching Tigers in Red Weather, three candles press, 2007, which was selected by Joan Larkin to win the Three Candles Press Open Book Award. He was a 2010 Finalist for The Crazyhorse Poetry Award. His work has been nominated for the Pushcart Prize, Lambda Award, Thom Gunn Poetry Award, both the California and Northern California Book Awards, Best of the Web, and others. He has an M. F. A. in English/Creative Writing from St. Mary's College in Moraga, CA , where he studied with Robert Hass, Brenda Hillman, Michael Palmer, Carol Snow, Frank Bidart, Gary Snyder, Charles Wright, and Sharon Olds. Andrew is also a member of the Squaw Valley Community of Writers, where he studied with Galway Kinnell, Richard Howard, and Lucille Clifton. His poems, including Young Man With iPod (Poetry Midwest, #13), are taught at Ohio State University as part of both its English 110.02 class, "The Genius and the Madman," and in its "American Poetry Since 1945" class. At the age of 23, Andrew published his first chapbook, The Psalms (Big 23 Press), which was favorably reviewed by Dr. Clifton Snider in the Small Press Review (issue 226, vol. 23, no. 11.) *"Andrew Demcak." Contemporary Authors, Gale, 2017. Literature Resource Center, go.galegroup.com. Accessed 27 May 2017. OCLC WorldCat Author Identities: https://www.worldcat.org/wcidentities/lccn-no2009080970 Library of Congress Author Authority file: http://viaf.org/viaf/88547073/ Contact/Booking Information: email: andrew [at] andrewdemcak [dot] com phone: 510.394.5821

“An eerily amusing horror tale that will have readers rooting for the characters.”
– Kirkus Reviews 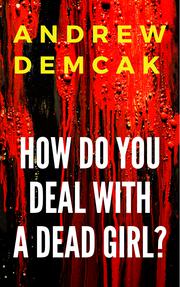 HOW DO YOU DEAL WITH A DEAD GIRL?

Los Angeles kids tangle with a mostly friendly ghost and a not-so-congenial spirit in this YA paranormal novel.

Ben D’Argento, fresh out of high school, is nursing a broken heart. His childhood sweetheart, Mark, found religion and left him for a woman. Looking for somewhere to lick his wounds, he absconds to his stepfather’s eerie summer house on Fawnskin Lake—where he is strictly forbidden from going. For company, he breaks his autistic 6-year old brother, Tadzio (“Taddy”), out of his group home, hoping to give him “the summer vacation he’s never had.” As the saying goes, be careful what you wish for. Quickly, Taddy unearths a creepy basement and establishes a rapport with Flora, a dead girl in a blue dress who claims: “This is my house. I live here.” Thankfully, the only neighbors for miles, Jayne and Ozzy, are an amiable couple—and it also doesn’t hurt that she is a psychic. Jayne tells the boys about Ainila, a spirit who is meant to guard the lake. But, as Taddy says, “There’s a bad thing at the bottom of the lake.” And it’s out to collect souls, the most prized of which turns out to be Taddy’s. In this rollicking series opener, Demcak (Alpha Wave, 2018, etc.) presents the gamut of spooky happenings—on this wild ride, readers will encounter tarot readings, séances, ghostly bee swarms, and “the Los Angeles Paranormal Investigation Society.” But he doesn’t try too hard to make it all fit into one neat package. Sure, some loose ends are left wafting in the ghostly breeze, a couple of coincidences stretch readers’ spectrum of credulity, and the ending seems to resolve a little too quickly, but horror can be a messy mistress. Besides, what counts are the moments of tension, elements of surprise, appealing cast, and ultimately the fun—is that voyeuristic ghost who’s peeping at Ben and a friend about to get down and dirty? With Demcak, that’s decidedly possible.

An eerily amusing horror tale that will have readers rooting for the characters. 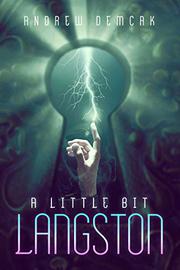 There’s something to be said about an undiluted message.

Demcak drops readers directly into the first-person perspective of James Kerr, a 14-year-old white gay boy with an undefined learning disability living in Los Angeles. Under last-minute pressure to finish an English class assignment, he writes a fully visualized poem thanks to the otherworldly hand of fictional Harlem Renaissance writer Montgomery Langston (whose equally fictional “An Undreamed Dream” is an appalling pastiche of “Harlem (Dream Deferred)”). When James does this again—and on the principal’s desk while under a trance—James finds out that he has both a gift or two and a half sister, a teenage Korean girl named Lumen, thanks to shared extraterrestrial DNA contained at Paragon Academy, a “school” that is a front for the U.S. government. In all of this, James falls mutually in love with his only friend, Paul Schmitz, a 15-year-old mixed-race Filipino/white neighbor and fellow ninth-grader whose father tries to “toughen up” through weightlifting, controlling contact between James and Paul, and homophobia-based physical abuse. They even become genetically manipulated cousins while remaining lovers. This book really wants to take its place in the marginalized-will-lead-us genre, as popularized by The Matrix and the X-Men franchises. But when that positive message is delivered with acceptance of taboos and negative stereotypes—such as mixed-race people’s “magical exoticism” and Magical Negroes using their supernatural powers to solely aid white protagonists—the message gets lost.

Andrew Demcak's new book, A Single Hurt Color, reminds me of the broken snow globe at the beginning of "Citizen Kane." Demcak renders a view of the world through the filter of a shard with a piercing command of language, and an ear keenly tuned to the music of each word. -J.P. Dancing Bear, editor, The American Poetry Journal
Published: Feb. 22, 2010
ISBN: 978-1450524056

Keira Fairchild is running for her life, and she won't make it far without someone watching her back. Her powers helped her elude a slave trader, Holcomb, who planned to sell her to the highest bidder, and the deadly Paragon Academy. But now Keira needs some allies and some answers. Who is the imprisoned alien being who keeps contacting her in her dreams? Keira is aided by a group of teens--James, Lumen, and Paul--with powers like her own, and all of them are ready for a fight. The small group must rescue the captive alien and escape Dr. Albion, who seeks to steal their abilities and eliminate them. Survival will mean a desperate struggle, and none of them can succeed on their own.
Published: May 14, 2018
ISBN: 978-1640801936

Poetry. CATCHING TIGERS IN RED WEATHER, winner of the Three Candles Press Open Book Award (selected by Joan Larkin), is a collection of poems by a new voice that combines montage cut-ups with an informing dialectic that gives us a wide array of contemporary American viewpoints. By turns playful and serious, he deftly embraces and criticizes a popular culture that is too complicated to dismiss with swift and simple comments. It is a book of rich rewards.
Published: Sept. 23, 2007
ISBN: 978-0977089239

James, Keira, Lumen, and Paul—teens with special abilities granted by their alien DNA—bonded over hardship, becoming friends and sometimes more. But now they’re held in Fort Bragg and subjected to painful tests by the evil Dr. Albion, and those ties are coming loose just when they need them the most. Budding romances and family relationships are tested as each teen struggles to choose where to stand and who can be trusted. Reunions with lost family members and the possibility of love with new allies strain already tense relationships, and not every heart will survive unscathed. But the Star Children are the only ones who can command an alien spaceship needed to intercept the Nibiru object—an unidentified celestial mass plummeting toward the planet. If they can’t work together, an unimaginable catastrophe will strike the earth, and they’re the only ones who can stop it.
Published: Feb. 15, 2019
ISBN: 978-1-64080-864-5

It’s not easy being Todd Williams, a fourteen-and-a-half-year-old gay musical prodigy. The bullies, Bob and Ari, at his fancy private school make his life a living hell. Todd’s drunken, irresponsible mother, Eddie, constantly embarrasses him and puts his artistic future in jeopardy. And now, his best friend, Jennifer, who plays clarinet with him in the orchestra, isn’t speaking to him. Maybe Leroy, Todd’s friendly poltergeist, knows what’s going on with her. To top it off, he can no longer rely on Jennifer's help in the race to solve a puzzle that could lead to a buried treasure. Todd must learn to stand alone. He’s finding out that growing up is far scarier than he ever imagined.
Published: March 13, 2014
ISBN: 978-1627987950

If There's a Heaven Above

If There's A Heaven Above" takes the reader on a tour of the Southern California demi-monde Goth scene of the mid-1980s, as seen through the eyes of club-kid, Matt. The novel combines innocence with experience, sex and drugs, Love and Rockets, with just the right touch of poetry. It is a thrilling ride along the freeways and turntables of that era: when AIDS was new, Reagan was King, and hope was a wounded kitten, cared for by the creatures of the night. The novel unfurls like an alternate universe John Hughes' movie, with a fabulous soundtrack by Love & Rockets, Siouxsie and The Banshees, Christian Death, The Sisters of Mercy, This Mortal Coil, and Bauhaus. The story of three young friends navigating love, sex, drugs, and heartbreak in the LA Goth scene is brilliantly rendered. You'll read it in one sitting.
Published: April 16, 2018
ISBN: 978-1980753094

The poems in Andrew Demcak's NIGHT CHANT are as conscious of the ghosts in the room as they are the living bodies. Through myth, they look for the secret life behind Eros with daring, candor, wildness, and wit. If you want simple consolation, go elsewhere. If you want to read poems that are dazzling and true, see here. -Paul Lisicky
Published: Oct. 1, 2011
ISBN: 978-1590213711

ZERO SUMMER's skinny, sticky, cock-swaggering poems take 'bloody comfort' in Andrew Demcak's lubricated, literary longing, the bourbon 'sweet / with unimagined grief,' the very words 'laboring / over / the soup-bones of literature.' This is a book that will get under your fingernails. --Randall Mann, author of "Breakfast with Thom Gunn"
Published: Jan. 15, 2009
ISBN: 978-1935402077