Andrew Stevenson has spent the past thirty years trying to make sense of the global economy working as a macro hedge fund portfolio manager, investment banker, and climate risk analyst.

Andrew's writing heroes include E.O. Wilson, David Foster Wallace, and Kurt Vonnegut and his illustrations are influenced by the 1960's pop artists.

A brief indictment of what debut author and illustrator Stevenson sees as the global economy’s endemic corruption.

Judging by the current U.S. election season, we’re living in an age of extraordinary discontent, especially regarding the state of the economy. Populist outrage isn’t merely the consequence of economic stagnation or a deficit of opportunity, but also due to an increasingly widespread perception that the system is fatally rigged to benefit a few at the expense of the many. Stevenson offers a tutorial on the history of evolving crookedness from the perspective of “a ranking member of the cynical elite,” essentially confessing to his own complicity in producing inequitability. The confessor divides economic history into four periods: feudalism, mercantilism, capitalism, and cynicism. In the first stage, he says, regnant kings composed the rules without any other aim than the satisfaction of their own interests. However, this enraged the business community, which eventually revolted and rewrote the rules in order to benefit themselves; this period Stevenson calls mercantilism. The success of mercantilism and the expansion of key markets, he says, led to capitalism, featuring rules written to provide crucial advantages to private enterprise. However, even though this system, at least in its original incarnation, ended up producing a more expansive roster of winners, many were still disenfranchised, Stevenson notes. Out of capitalism, he continues, comes the current age, cynicism, in which a surfeit of capital and the fear of dimming prospects inspired the robber barons of business to rewrite the rules yet again. Much of the book is devoted to candidly explaining these new rules, which amount to various kinds of mountebankery, rhetorical manipulation, and exploitation. The whole work also features cartoonish, consistently hilarious illustrations. The book is dotted with cheeky, wryly delivered advice, sure to please readers whether they share the author’s cynicism or not: “Remember kid, if you borrow enough money it’s the lender that has the problem.” However, this short, unremittingly (and admittedly) pessimistic book provides nothing new or particularly rigorous for readers interested in understanding our current economic doldrums; it’s more a complaint than a lesson. It’s a very funny complaint, delivered with style, but one without nuance or disciplined scrupulousness.

An entertaining, cynical critique of cynicism, mostly worth reading for its comedy and brevity. 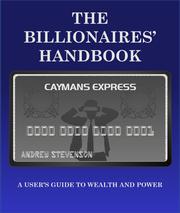 A sardonic spoof of business books that lambasts the superrich.

In this cleverly structured, darkly humorous book, portfolio manager/investment banker Stevenson (Cynicism, 2016) writes from a first-person perspective, as if he’s a billionaire candidly revealing his worldview. The resulting mock “handbook” begins with an overview of what he calls “The Old Rules.” In it, the narrator breaks economic history into three main periods: Mercantilism, Capitalism, and Cynicism—the latter of which, he says, is the “new economic system” that has replaced capitalism. Thirty “New Rules” of the post-capitalistic economy follow, each of which Stevenson outlines in biting, satirical text. For example, Rule 15 says that “a CEO’s value is measured by how much of their company’s cash they can get away with transferring into my bank account,” while Rule 22 proclaims, “if you pay someone enough you can always get the answer you are looking for.” Each of the rules, just a few paragraphs long, follows a similarly humorous path. The second part of the book is even darker in tone, as the narrator claims that the 2008 financial meltdown allowed billionaires to tap into “newfound fear and anxiety”: “Then we elected one of our own the President of the United States, and before you knew it, we were right back on track.” (An accompanying illustration shows a Donald Trump–like figure on a throne.) The narrator then proceeds to deliver 25 more rules that take aim at current issues and beliefs with uproarious cynicism. The author addresses health care, immigration, “fake news,” and other topics, depicting billionaires as narcissistic, hardhearted, and morally corrupt. One rule, for instance, advises that “empathy is the enemy of ‘the people’ and by ‘the people’ I mean rich people,” while another observes that “a shrinking middle class is great for lowering your company’s wage bills.” The book’s closing section, “A Few Years Later,” offers readers a novel contrast; in it, the billionaire narrator has retired and has decided that he’d like to be remembered as “The Greatest American of the 21st Century.” The 20 rules that he puts forth at this point reflect the actions of a more compassionate, philanthropic, and socially conscious person; ironically, however, he offers these rules solely in a personal bid for immortality. Overall, there are several elements that make this parody stand out. The voice of the narrator, for one, is spot-on, brilliantly portraying a self-involved and exceedingly callous caricature of a modern-day magnate. Despite occasional grammatical errors, the text is consistently cunning and merciless, and it’s made all the more effective by the inclusion of vibrant, colorful illustrations that cleverly reinforce the content throughout. The last section of the book shrewdly presents what American society could possibly be like if the people in it followed moral tenets of justice and fair play. Overall, this is a tour de farce that offers an unrelentingly amoral, profit-driven characterization of a billionaire, and as with all potent satires, the author’s words hit the mark more often than not.

A wicked and witty work.