As a Mystical Author, Anita Merrick is a 3rd generation psychic, retired and living in a wooded area of Erin, NY with her husband, Timothy, and furry children—a West Highland White Terrier, Storm; a Scottish Terrier, Argyle and an old Cavalier King Charles/Westie, Whisper. She is retired from 39 years as a secretary and now serves spirit as Crystal Wind, a Psychic Intuitive, Tarot Reader and Medium and an ordained priestess in the Order of Melchizedek. She holds certification as a Tarot Master from the Tarot Certification Board of America. Prior to 1991, she performed as Nehebka, a semi-professional Oriental (belly) dancer, as well as raising, training and showing Appaloosa horses. Nowadays, her focus is on working psychic fairs and doing readings for clients over the telephone AND especially, fulfilling a long-time dream as a writer. A BITTER WIND, Time Entanglement, a first novel comes from her live-long love of Egypt, its mythology, ancient mysteries and magic (heka/Akhu) and everything about its culture then and now. This began when she started belly dancing in 1999, taking a first trip to Egypt where she performed at the Winter Palace of Luxor and on the Cruise Ship. She married her 2nd husband, July 6, 1996 and in 1997 went back to Egypt, focusing less on dancers and more on the paranormal, supernatural and metaphysical aspects of Egypt; in 2007, after a synchronistic connection with Nicki Scully's Shamanic Journeys, returned to Egypt on a trip that included Tarot classes with Mary K. Greer and writing the experiences/impressions with Normandi Ellis. Then, in 2011 (1 week after the first Revolution against Mubarak), she returned on the 4th trip to deepen understanding and intuitive expansion/development -- and there, experienced the temple of Khnum in Esna, which offered channeled information and inspiration from the spirits that further connected her to the mysteries of Egypt—and from that journey came the story that became the first of a 3-book series (still in progress) (A Bitter Wind - trilogy). To express these last years of psychic development, Egyptian mystical experiences and describe the resultant focus of her life on writing . . . "Like a portal opened into the ancient past, the spirits spoke and their stories became this the words within A Bitter Wind . . . "

“A supernatural fantasy impressive for its subtlety and Egyptian research.”
– Kirkus Reviews 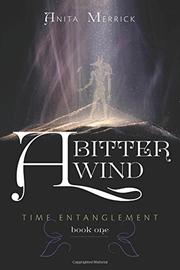 In this debut fantasy, a young archaeologist struggles to decipher a temple’s puzzling hieroglyphics and his own paranormal talents.

The University of Chicago dispatches Alexander “Ramses” Smith—aka Lex—to study a temple in Egypt. Lex arrives via the Nile River in Esna, hoping to perform research valuable enough to secure his doctorate. The Temple of Khnum, however, has proved difficult for archaeologists to study because it’s filled with confusing, supposedly incoherent hieroglyphics. In the bare-bones apartment procured by the university, Lex wonders if professor Orridge has sent him on a fool’s errand. When Lex enters the temple, he acknowledges and explores a curious energy within. Lex’s teenage years were spent under the tutelage of a clairvoyant grandmother, who realized he had gifts worth nurturing, but he doesn’t want to rely on them here. Then, after touching the bas relief of a priest, he starts hearing disembodied voices, including one that says, “Time here looped, curving in upon itself.” Back at the apartment, he remembers the journal of Dr. Broderick Gillwood, which had been slated for destruction until he pilfered it from the university. In a shocking feat of synchronicity, Gillwood also studied the Temple of Khnum, which Lex soon discovers is inhabited by ancient demons called afrets. Merrick conjures a narrative reminiscent of H.P. Lovecraft—not thanks to hideous creatures, but because Lex’s story travels inward, through his own paranoia and terror, as much as it moves forward. Esna and the temple itself, described in lavish detail, persist as characters more memorable than some of the people (like the grocer Malik) Lex meets; at one point, the temple “mesmerized with teeming dust particles that sparkled as flecks of tinfoil.” Merrick also displays immense knowledge of Egypt, comparing temples to spiritual batteries and telling readers that they “consisted of multiple structures built over a long period of time, which reflected the evolution of culture and beliefs.” Her greatest success, however, is in isolating the reader alongside her protagonist and toying with both psychologically.

A supernatural fantasy impressive for its subtlety and Egyptian research.

Gone With the Wind & all of the Harry Potter Series

Continuation of the story of Seneferu as he invests in his future self to elminate errors made in the past . . . but, can they be accomplished in time, before the future is destroyed upon his untimely death--again. The resolution of the story holds many surprises and proves that everything that meets the eye, may not glitter in truth.

Lex gets deeper into the mysteries of the Temple of Khnum and the spirits there; first he must destroy the anchor for the dark energy, the Blasphemy Shrine of Dr. Broderick S. Gillwood - then things become more mysterious, dangerous and magic becomes untangled until Lex is made the vessel of Seneferu and the time entanglement twists beyond comprehension before it can begin to unravel . . . all teetering on the dangerous edge of an irreparable time paradox that can destroy his future.