Ann Eyerman grew up in land-locked Columbus, Ohio. It was the perfect place to nurture dreams of travel and living by the sea. In 1967, when a call came from an old friend offering her a job in Washington, D.C., to work at the Smithsonian Institution, she was on the next Greyhound bus heading east. It was the beginning. Two years later, after a fortuitous lunch, she landed a job at a college in Germany for a year. She didn’t say no. That’s where she had her first tastes of European life, food, smells, culture, architecture and history. Ann stayed in Europe for almost a decade, writing detailed letters home which, fortunately, her archival-minded mother saved. In 1981, she returned to Washington, D.C., dusted off her typing skills and worked unhappily for a huge law firm, completed a bachelor’s degree she had started in 1965 and began her love affair with cats. In 1995 Ann moved to Toronto, Canada. She turned her experience of working in an office in a changing economy into research for a thesis on work and work issues, which resulted in a Master of Environmental Studies and eventually in the publication of Women in the Office: Transitions in a Global Economy (Sumach Press, 2000). Ann still lives in Toronto where she works as a job coach, writer, Excellent Cat Sitter and blogger. She lives with two rescued cats, who have become regular contributors to her blog, Annie’s Odyssey (http://anneyerman.wordpress.com/). Currently Ann is hard at work gathering recipes for her next publication: a cookbook filled with dishes and recipes encountered throughout those years on her Mediterranean Journey.

“A keen eye combines with an easy writing style in these chronicles of fish-out-of-water exploits and cultural misunderstandings, all seasoned with plenty of salty wit.”
– Kirkus Reviews 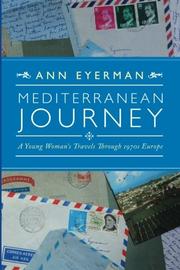 A woman recounts her youthful years traveling and living in Europe.

Inspired by a shoebox of old letters she’d written to her mother, Eyerman (Women in the Office: Transitions in a Global Economy, 2000) recalls her footloose years during the 1970s and early ’80s in Europe and North Africa as a young woman escaping a childhood in Columbus, Ohio. She mainly went to places where she had some sort of personal connection, however tenuous, so that acquaintances could help her stay on the cheap. After a visit to Yugoslavia, she headed to Italy for three months and then moved on to France, where she found lodgings with the help of a friend’s sister and tried to get on the good side of a haughty French matriarch named Madame Gravois. From there, it was off to Spain, where a woman from Brooklyn unexpectedly appeared on her doorstep and moved in, then to Morocco, where Eyerman found a bare apartment on the Rue d’Amour above two women who turned out to be prostitutes. Soon, she departed that noisy, hot and hellish country: Young boys sifted through garbage for profit and tortured cats for fun, and she endured bad plumbing that “did not make for regular bowel movements,” especially after she contracted worms. Then it was on to Greece, including Olympia, “home of the gods and athlete’s foot,” and misunderstandings and mix-ups with the locals, till finally she returned to Spain and bought a run-down, rat-infested house for a low price. Though little of import occurs in this tale, Eyerman’s eye for detail and remorseless sense of humor help her weave a funny story about the joys and complications of travel abroad. The landscape, the characters who inhabit it, and the American expats and tourists who infest it all come alive under Eyerman’s acerbic, cynical but nevertheless forgiving eye. Like an entomologist preserving beetles in a bottle, she catalogs national quirks and peculiarities as she passes through each country and on to the next. For many readers, this pleasurable read will beat the expense and hassle of actually traveling.

A keen eye combines with an easy writing style in these chronicles of fish-out-of-water exploits and cultural misunderstandings, all seasoned with plenty of salty wit.

Too many to narrow down to just one

Women in the Office: Transitions in a Global Economy

Analysis of the changes in the office environment due to technological changes and globalization and how those forces affected the women who work in those environments. The book is enriched by the stories and experiences of twelve of those office workers, including the author.
ISBN: 1-894549-03-1