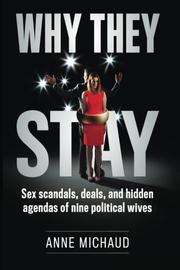 A journalist explores the motivations and emotional constructs of nine political wives who chose to stay in their marriages—in some cases, only for a while—after being confronted with their husbands’ infidelities.

Why do wives of prominent politicians stand by their men after they have been betrayed, especially when that disloyalty has been publicly revealed? This is the question Michaud, a former columnist for Newsday, sets out to answer in her gossipy debut book. She establishes a rather esoteric scale by which to evaluate these women’s decisions—something she calls the White Queen Quotient. For those unfamiliar with 15th-century British history (or the eponymous TV series), the original White Queen was Elizabeth Woodville, who “apparently knew that her husband Edward IV had mistresses—and even one special mistress, Elizabeth Shore. But the rewards of being queen kept her bound to her royal husband.” Michaud then creates five attributes by which she establishes her subjects’ White Queen rating: Submitting to Tradition; Longing for Security; A Personal Sense of Patriotism; Responsibility for Family’s Emotional Health; and Ambition to Build and Bequeath a Legacy. From Eleanor Roosevelt (whose heartache was kept relatively private) to Huma Abedin (assistant to Hillary Clinton and former wife of Anthony Weiner), Michaud, using numerous secondary research sources, details the family histories and accomplishments of each of the women and their erring spouses. There’s not much new here about the six American couples studied, but U.S. readers will likely be less familiar with the one Israeli and two British couples dissected. Skillful prose makes the dishy profiles an engaging read. Unfortunately, Michaud sometimes veers into judgmental speculation and indulges in unsubstantiated assumptions. For example, after discussing the humiliation of wives facing the press during their husbands’ standard confessionals, she writes: “The publicity allows the women who stay to inflate their sense of themselves as loyal, and to bask in other ego-pleasing fantasies.” Of Abedin, the author offers: “Huma had to choose: Anthony Weiner or Hillary Clinton. In the end, it wasn’t Huma’s injured wifely feelings that ended her marriage so much as her professional pride and ambition.”

A lively political book that focuses more on pop psychology than objective analysis.

Author Luncheon for "Why They Stay"