Anthony Hernandez is a first time commercially published author after several years of collaborative effort with his father, Richard Hernandez, in bringing his father’s memoir to the reading public. As background, in Anthony’s health care facilities development career, extensive writing and speaking in both private and public work environments was an integral part of his career. Working through and with a variety of specialized disciplines and professionals, one could say that Anthony made a career of getting decision makers to say yes so that a variety of health care and senior living care centers could be built and services provided to different communities throughout the northwest. Anthony resides with his wife Patty and Frank the cat in the City of Bothell in Washington State, filling their lives with reading, fly fishing, cooking, dining, putting 1000 piece puzzles together, and continuing to set and achieve new life goals. 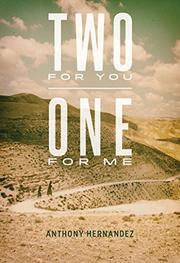 TWO FOR YOU, ONE FOR ME

A posthumous debut autobiography supplemented with photographs and commentary by the author’s son.

Richard E. Hernandez, who died in 2012, was born in 1922 in Nogales, Arizona, one of several towns near the Mexican border that would define the early years of his life. By 1927, his father, Edmundo, had deserted his mother, Guadalupe, and she became an alcoholic. She and her son wandered through border towns, mainly in the Mexican state of Sonora. Although she had family members willing to help in Nogales, Mexico, and in Arizona, she was unwilling to stay put: “my mother did not want them meddling in her life, so she stayed as far away from them as she could.” Frequently, the author was left to his own devices, sometimes for days or weeks. His life changed dramatically in 1934, when he was 12 and homeless. He met a man named Miguel Mendoza, at the Agua Prieta border crossing, who brought him back to Douglas, Arizona, and had him declared a ward of the state; he and his wife raised Hernandez until 1936, when the state reassigned custody to his grandparents in Tucson. His initial experiences with instability motivated him to build a productive life as an adult. Extensive descriptions of his time in the Civilian Conservation Corps, his five years in the U.S. Army, his civilian work, marriage, and family life present unique glimpses into prewar and postwar America. The author’s youngest child, Anthony, encouraged him to write down the secrets of his early life, which he’d carried with him in silence for decades. The resulting articulate and emotional prose is generally optimistic but often heartbreaking: “My mother and I must have been quite a sight. Here was a woman, obviously drunk, pulling a sobbing kid, maybe hungry or sick, surely scared, and in my heart embarrassed for the both of us.” Although composed primarily for family members, the story offers a detailed geographical and cultural portrait of the border towns during the Great Depression. The relative ease with which one could cross back and forth between the two countries stands in poignant contrast to today’s reality.

A raw, honest, and sad memoir.

Publisher: 2 for You, 1 for Me Publishing

Born and raised in Seattle, Washington.

I tend to focus on non-fiction literature with an emphasis on World War ll.

Imparting an appreciation, understanding, and skill of fly fishing casting to those family and friends wishing to learn.

To live my life to the fullest and most satisfying level despite my specific physical limitations experienced in part through aging.