Anthony L. Smith was born in the Philippines, went to elementary school in Washington, middle school in North Carolina, and high school in Texas. After a rather dull year at college working a plethora of unrelated jobs, he joined the U.S. Air Force, and has been traveling the Pacific ever since. His travels have brought him all the way from the Demilitarized Zone to the tallest towers of Kuala Lampur, the typhoon-ravaged cities of the Philippines to the beautiful opera house of Sydney, Australia. It was these experiences that gave him the idea for his first novel, Blood Haven.

For now, he calls his home the beautiful island of Okinawa, Japan. When he isn't fixing airplanes, he enjoys exploring the island and searching for his next big inspiration. 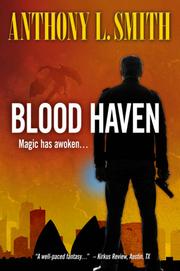 Monster-hunting and wizardry are the primary elements of Smith’s fantasy universe, which resulted after a mysterious Change swept across the world, granting some people tremendous power and creating a social imbalance in society. The story centers on Killian, a vampire-hunter who’s just returned to Blood Haven (formerly Sydney, Australia) after a long absence; he’s also an Elemental, a mage who can magically transform objects at will. At the school where he used to teach, his friend Skye introduces him to Lucas, a 13-year-old boy with an extraordinary talent for all sorts of magic—not just one variety, as with other mages. Soon after meeting him, Killian finds himself guarding him from unknown assailants in trench coats, as well as government agents. He soon gathers a team of old friends, old enemies, and new recruits. They include Loop, a light mage or “Lighter”; Jo Jack, a magical supplies dealer; and Stamp, an old friend and romantic rival who can control the Earth itself. A host of other colorfully named characters also appears throughout the novel, each with a back story, snappy dialogue, and relevant quirks. Magic, however, feels strangely underused. Except in battle, where guns seem just as useful, magic is rare outside of parlor tricks and medicine. Smith provides sharp descriptions during some magical scenes; for instance, when Chaser, a friend of Loop’s, is removing a “tracer” from Killian’s bloodstream, “[h]is vision suddenly went spotty and he cried out as a shockwave of pain bit into his stomach, shooting out all the way to his fingertips and toes. A spasm racked his body and he hunched forward, clutching his stomach and trying not to retch.” But Smith’s fictional world sometimes feels too eclectic for the story to fully reveal it. The monsters, for example, only show up in one early scene, and many opportunities for magical assistance go unused in favor of more typical thriller-style action.

A well-paced fantasy, though the city of Blood Haven feels underexplored.