His projects have been published in over 2,700 articles in magazines and newspapers throughout the United States, Europe, Scandinavia, England, South Korea, Australia, and Japan, and have been included in many books. His building designs have been in group architectural exhibitions at the Cooper-Hewitt Museum, Columbia University’s Center for the Study of American Architecture, and Columbia University’s Avery Library Centennial Archive Exhibition, “Contemporary Architectural Drawings.”

He has been included since 1980 in the international compilation Contemporary Architects, published by St. James Press. He is included in Wikipedia’s “The List of Notable Architects––well-known individuals with a large body of published work/notable structures,” which starts with Aa (between 2080 BCE and 1640 BCE).


Lectures: ACM has been honored by invitations to give the annual lectures at these institutions: in 1979, the Annual Guest Lecture at Trinity College in Dublin, and in 1982, the Henry Hornbostel Memorial Lecture at Carnegie-Mellon University. In 1985, he was invited by the Hirshhorn Museum to give a Retrospective Lecture on his work, marking the 20th anniversary of his practice. ACM has been invited by the Smithsonian Institution to deliver seven lectures on architecture/planning, as well as a four-part lecture series in 1978, entitled The Architecture of the Absurd.

The international publicity generated by the many facets of ACM’s Washington Harbour Complex (Architecture, Urban Design, residential/office/commercial uses, a visionary flood control system, fountains, and its siting on the Potomac River) prompted a steady audience stream in the 1980’s and 1990’s, requesting guided tour/presentations. The groups included:

For the Department of the Interior, he analyzed 80 downtown waterfronts in general and six in depth, resulting in a best-seller on the list of Government Printing Office publications in July 1971: Bright, Breathing Edges of City Life: Amenity Benefits of Urban Water Resources.


Painting: ACM has had solo painting exhibitions in New York, Chicago, Washington, and Paris, and has participated in group painting shows in New York and Cologne. His travelling museum exhibition, Visions of the Future, was shown in museums in the Czech Republic and Poland.


Writing/Books: ACM’s first book, The Powers of Preservation, which focused on his work with historic structures and Master Planning projects, was published by McGraw-Hill in 1998. His current book ready for publication in 2014, is Interruption of the Cocktail Hour. His next book ready for publication at the end of 2014 is Washington Comiks, an irreverent look at the absurdities of our nation’s capital, as portrayed by 30 paintings. (www.washingtoncomiks.com)


Writing/Magazines: The Journal of the American Institute of Architects. The Washingtonian (Contributing Editor on Urban Affairs from 1965 to 1978). The Weekly Standard, articles on art and architecture from China, Crimea, Miami/Art Basel, and Venice/Architecture Biennale. 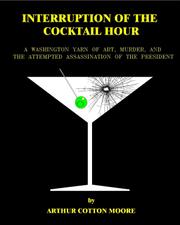 Interruption of the Cocktail Hour

Moore’s first foray into fiction (The Powers of Preservation, 1998) is a black comedy about a struggling artist who finds a killing device that might prove beneficial to his career.

Pete Preston is an ambitious painter but not a successful one. He makes ends meet by taking odd jobs, until the day he happens upon a calculator that, by simply pressing 5, kills whatever, or whomever, it’s pointed at with a heart attack. Pete dispatches a few unwholesome characters, at least one in self-defense, but it isn’t long before those haughty art critics, who so often denounce Pete’s work for their own agendas (like a promotion), become targets. The novel, despite featuring a protagonist who ultimately (and correctly) defines himself as a serial killer, takes a tongue-in-cheek approach. The comedy is decidedly dark—there’s a joke about a school where only the older students are permitted to carry guns—but many scenes are undeniably humorous, even when they stray from the main plot, like the story of the local “Crazy Couple” and their bumbling attempts to kill one another or Pete and his pals’ cross-dressing for performance art back in the ’70s. Moore doesn’t handle the notion of murder with nonchalance: Pete often regrets the killings, regardless of how horrible the person may have been, and after a bookie witnesses Pete using his calculator, the painter doesn’t take lightly an offer of millions to assassinate the president. The story is also quite profound, as the method of offing someone is so easy (and easy to pass off as accidental) that it focuses almost solely on the consequences of murder; Pete spends more time debating whether he made the right choice than worrying about being caught. There is, however, enough death to catch police attention, which adds dashes of suspense to the narrative. The author, an architect and painter, lovingly portrays both professions: an artist who’s genuinely hurt by criticisms of his work and who enjoys pretending to be an architect at a cocktail party. The ending, even if readers can guess it, is wickedly funny.

Perceptive and droll; Moore paints his story in dark but striking colors.

The Powers of Preservation. New Life for Urban Historic Places.

The author chronicles the historic preservation/restoration and master planning portion of his architectural practice -- and -- shares the humorous backstories of some of the country's most significant structures, e.g., The Library of Congress.
ISBN: 0-07-043394-1

The absurdities of our nation's capital, as shown in 30 irreverent and amusing paintings. Ready for publication at the end of 2014.