As a kid growing up in north Louisiana, I relied on family, friends, and an active imagination to get me through some of the most difficult times. During my parents’ divorce when I was 12-years-old, my younger sister and I were shifted from one relative to another while mom and dad hashed out a living nightmare that affects so many families. Through it all, I found escape through creative writing. Full of nervous energy at that age I was ADHD before ADHD became a nationwide crisis. I battled depression and Grand mal seizures that came in the night like a lightning bolt electrocuting my brain. Living with my dad, who worked shifts at a chemical plant, I was afforded lots of free time as a teenager. Apart from exploring outside, I turned my attention to watching tons of movies and reading hundreds of books in multiple genres, delighted to experience different worlds. I penciled short stories on notebook paper to entertain myself and some friends, just to create and escape. Over the years I’ve developed a coat of steel-grade emotional armor that’s as thick as rhino’s skin, and I think it all started when I handed my uncle a few pages of a story I was working on, hoping he’d like it. He sang the first sentence as if it were a song lyric, then put the pages on the kitchen counter, set his can of beer on Chapter One, and said with a laugh, “Ash? New York’s got the publishing industry cornered. Only smart people write books.”

The emotional armor kicked in at that early stage, equally used in full force throughout coming years against creative criticism and brutal childhood insults (I’m only 5’7”, so use your imagination). I went on to complete my first 300 page novel at 18. I then spent the next four years experiencing college life in all its unabashed glory, majoring in English with a Minor in Human Psychology, trying to fit in the best I could manage. Living alone at my dad’s lake house near Northwestern State University, I kept dreaming and writing. Uninterested in the school curriculum, and having gone through a soul-crushing breakup with a lovely country girl who cheated on me with my best friend (cue country song), I made the executive decision to search out my lot in life elsewhere.

In 2000, then living in Shreveport, I started working for a cell phone company (remember those boxy Nokias?—yeah, I sold the crappy plan that provided the crappy service). I spent my evenings writing The Parent Killer, my debut novel concerning child abuse and adult revenge—inspired by the tragic story of a local 9-year-old girl who was beaten to death by her stepfather. I’m proud to say this controversial novel was subsequently published in 2001 by RA Publishing in Nashville, Tennessee, and that the stepfather is still locked up at Angola State Prison. For three years I made the promotional rounds at local television studios, radio stations, and did several magazine interviews promoting this well-received novel. It was truly an exciting high point in my journey as a struggling writer.

In 2003, while attending a family reunion back home (some call it a graveyard workin’), I was told about the West Clan, an outlaw gang that robbed and murdered travelers passing through the territory of Winn Parish, Louisiana. Between 1866 and 1872, John West (a Sunday school teacher and local Constable) plied his criminal trade alongside his heartless co-leader, Lawson Kimbrell, an ex-Confederate soldier nicknamed “Laws”. They dispatched so many innocent people that they resorted to digging wells in order to hide the bodies. The West Clan outlaws accumulated so much ill-gotten wealth they hired an accountant to keep the books. To this day, locals in the area believe some of the treasure is still buried somewhere off Highway 84 between the cities of Winnfield and Natchitoches.

Intrigued, I researched this local legend extensively, studying two books that had been previously published on the subject—one offered in 1963, the other in 2005. I went on to write Nightriders, a historical action-adventure that showcases the rise and fall of the West-Kimbrell Clan. In many ways I wanted to vindicate the senseless, tragic murders of innocent families seeking a better life in rough times. Men, women, and children (even infants) fell victim to the Clan. Although they are unable to condemn their ruthless killers, I set out to give them a voice.

I turned 43 in July, and haven’t taken a leap of faith in a long while. It has always been my dream to see one of my novels be adapted into a movie. I believe a positive Kirkus Review helps my chances in seeing such a monumental event come true. And if Nightriders ever hits the big screen, I’ll buy my uncle a front-row ticket.

Nightriders is my fourth book.

“This hybrid beast of a book proves successful in bringing the past alive and weaving a sinister bedtime story for readers.”
– Kirkus Reviews 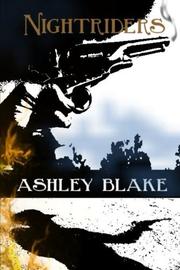 Louisiana author Blake (Dark Bayou, 2013, etc.) returns with a convincingly researched tale of confidence betrayed and blood spilled. After the U.S. Army retreats from the Deep South in the wake of the Civil War, clans of vigilantes arise from the ruins of the Confederate Army. Some are peacekeeping, some purely racist, and others, like the West-Kimbrell clan, are entirely murderous. “They hated their fellow stranger with a purity that rivaled most men’s love for a beautiful woman,” Blake writes, proceeding to relate the multifarious misdeeds of a dangerous band of outlaws. The group includes Jackson Lawson (ironically nicknamed “Laws”) Kimbrell, a lethal hypocrite with “a wild soul and mean as a bull”; his philosophical Uncle Dan; and Sunday school teacher John West, who “possessed a disarming gentleman’s charm that misled folks into a false sense of trust.” The gang steals horses, kills children, and removes whole families from history. All of this is relayed to the reader in 1913 by the ancient Caleb “CS” Cole, whose daddy, Wallace Cole, along with countervigilante Jim Maybin, played a major role in the clan’s final chapter. Herein, the tastes and sensations of central Louisiana in the 19th century (and, to some extent, the state today) are revived and relived: the ubiquitous religiosity, the smell of pine and mud, the “squirrel mulligan, sausage gumbo, chicken n’ dumplings and raccoon stew.” This novel is a history lesson. Unfortunately, this can at times get in the way of it being a novel. “Why they did this to their fellow man, I can’t tell you,” CS tells the reader, but the job of a novelist is not merely to question motives but to explore them. The psychology of the gang is never pursued, and this remains a missed opportunity. Still, when read as a lightly fictionalized history, in the tradition of Bruce Duffy’s novels and Norman Mailer’s The Executioner’s Song, this hybrid beast of a book proves successful in bringing the past alive and weaving a sinister bedtime story for readers.

A historical novel about 19th-century vigilantes that re-creates a lost world as it morally instructs.

Down in Beaux River, Louisiana, someone’s after Freddy Tango. After another wild night at his bar, Freddy’s Lounge, he arrives home to find his front door riddled with bullet holes and his windows shattered. His live-in grandfather, Cecil Tango, drunk and angry, a pistol within reach, raves about being attacked by a long-dead outlaw named Percy Yates. Freddy discounts Cecil’s accusations as alcohol-induced delusions. Following that fateful night, Freddy decides to seek justice with the assistance of a couple of biker friends. As he begins fitting together pieces of a sinister puzzle, Freddy realizes there is a kernel of truth to his grandfather’s claims. Someone is looking for Percy Yates’s treasure. And they believe Cecil Tango has it. Up against unseen evils determined to harm his grandfather, Freddy is ill-prepared for the forces out to get them. But he will stop at nothing to uncover the truth and protect his loved ones. Known for his laid-back, personable writing style and complex plotting, Ashley Blake weaves a tale intertwined with a healthy dose of action and suspense where characters are not who they seem and paths often take unexpected turns. From the author of Dear Arial, and The Parent Killer, comes a classic mystery that is sure to entertain.
Published: Sept. 2, 2013
ISBN: ISBN-10: 0615618456 ISBN-13

In Eberville, Louisiana, a widowed mother weeps over the recent death of her son. People are calling the tragedy an accident. Stella Voss, the boy's mother, is screaming murder. When the town's sheriff is unable to prove her suspicions correct, Stella takes matters into her own hands. And support is only a letter away from her mailbox. Rumored to be one of the last of the Moss Hill Witches, Ariel Bordeaux is possibly Stella's answer for revenge. Ariel agrees to Stella's wishes only in exchange for information leading to a shotgun-wielding psychopath who's been mailing her threatening letters from Eberville. Ariel knows she must stop him before he fulfills his evil desires.
Published: Sept. 15, 2006
ISBN: ISBN-10: 1425911358 ISBN-13:

Haunted by horrific memories from his abused childhood, the main character finds a notebook of three children bonded together by the stories of their own parent's atrocities to them. Determined to seek revenge on their behalf while they are in temporary hiding from harm, he sets out to violently kill each one of the evil parents.
Published: Jan. 15, 2004
ISBN: ISBN-10: 0970698321 ISBN-13: