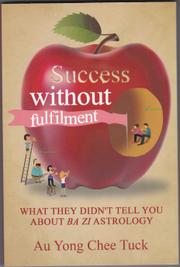 Tuck (co-author: Winds of Change, 2016, etc.) explains the nuances and intricacies of the ba zi system of Chinese astrology.

Book 1 of this two-part work offers examples of ba zi, in which five “elements” (water, fire, wood, earth, and metal) are said to affect one another, in conjunction with specific times, to influence people’s fortunes. After expository chapters that lay out details regarding, for example, the characteristics of animals associated with different months and the significance of dates, readers encounter intricate charts showing each part’s influence on the rest. However, readers will require some background experience with traditional Sinospheric divination and astrology in order for this section to be of practical, regular benefit. In Book 2, Tuck presents 10 chapters on the triumphs and failures of various real and fictional people—such as Rosa Parks, Jim Henson, Robert E. Lee, Jon Voight’s character in Midnight Cowboy, Salvador Dalí, and Sir Arthur Conan Doyle—case studies that aim to show ba zi’s clairvoyant power. Numerous times, however, the theoretical predictions seem to fail to line up with what actually happened to the subject; in one memorable instance, Dalí is remembered as a “leader” of surrealism, but his stars foretold “follower” attributes. Overall, the book is stylistically and grammatically sound. However, there are several instances where more editorial care would have ironed out some wrinkles, such as the use of the verb “to clash” with a direct object in a chapter titled “Hey! Don’t Clash My Success Away!”

This book’s mostly clear prose and straightforward charts will illustrate elemental, divinatory principles to initiates, but it falters in its second half.

The Brothers Karamazov, Waiting for Godot, Alice in Wonderland - from the philosophical to the Absurd to the nonsensical

"What is the use of a book...without pictures or conversation?"

"Off with his head!"

Money Power and fame in astrology

Winds of Change: Myth and truth in feng shui and Ba Zi

A brief introduction to feng shui and Ba Zi astrology. Why some theories seemed to be popular but were shown not to work out in practice.