Babette de Jongh is a professional telepathic animal communicator, teacher, and award-winning author of romantic fiction. She lives with her family and dozens of wise and quirky animals on Dragonfly Pond Farm, a multi-species oasis in the backwoods of Alabama. Whether she’s writing another book, teaching a workshop, or communicating with a client’s animals, she’s saving the world, one happy ending at a time. 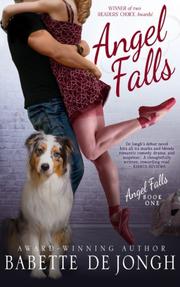 A spunky ballet teacher has to choose between her small-town sweetheart and a suave, Scottish newcomer.

After her New York City dance career fell flat, Casey Alexander came home to open a studio in Angel Falls, Alabama, a “dinky little deep-south town on the backside of nowhere.” To add insult to injury, she has to face Ben, the high school sweetheart who promised to follow her to New York but knocked up her best friend Melody instead. Three kids later, Melody is living the happily-ever-after life that should have been Casey’s. After a reconciliatory shopping trip ends in a freak car accident, Melody’s dying wish is that Casey take Ben back, and it looks like Casey could get that perfect-seeming life after all. However, Ian Buchanan, a newspaper mogul who has just bought the Angel Falls Informer and the building that houses Casey’s studio, has also put in a bid for Casey’s heart. Steamy nights with Ian, blissfully domestic moments with Ben, and bouts of survivor guilt result in a cocktail of emotions “as heady and confusing as Long Island Iced Tea.” Both prospects are not without their flaws. Ben’s version of caring for his kids—Jake, Maryann, and Amy—consists of foisting them on Casey at a moment’s notice. Ian is so surly that Casey initially nicknamed him the Newspaper Nazi, and he still bears the scars from a tragic first marriage. But when it comes to Ben and the kids, Casey will always be second best. De Jongh’s debut novel hits all its marks and blends romantic comedy, drama, and suspense. The characters are well-crafted—there’s no perfect Prince Charming—and Ben’s kids make for a compelling complication to the love triangle. Three-year-old Amy amplifies Casey’s guilt, and Jake’s rebellious preteen antics create opportunities for Ian to come to the rescue, though middle-child Maryann feels underdeveloped. Nevertheless, this is a lovely story about the intersections of love, friendship, duty, and self-care.

Saving the World, One Happy Ending at a Time.

Learn how to communicate with animals in twelve weeks with this groundbreaking how-to book written by animal communicator, teacher, and award-winning author Babette de Jongh.