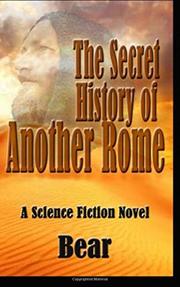 The Secret History of Another Rome

From debut author Bear comes a heady sci-fi novel about a futuristic Roman Empire and the man in charge of it.

It’s 2681, and Ranulf, who is “handsome in a hyper-masculine way,” is the supreme pontiff of the Empire of Rome. Based in Alexandria, Ranulf is a curious ruler despite the regimented society in which he lives. Privately educated, he has always possessed an inquisitive mind: “What is the law and who decides?” he wants to ask his tutor at a young age, though he resists the urge. Ranulf grows suspicious of the powerful governmental group known as the Librarians, a group whose “precepts and principles” he has long been forced to study. What might these Librarians—who do not leave the Library yet claim a great understanding of the world around them—be trying to hide? As one Librarian advises Ranulf, “How the Empire is administered is really a minor issue for the Pontiff.” It is soon clear, however, that a man like Ranulf disagrees. Bear’s narrative unfurls in matter-of-fact prose that favors lengthy explanations: “The Empire is ruled by the Supreme Pontiff. He has legal control over the administrative and military apparatus of the Empire and is advised by the Librarians through the Council of Twelve.” As such, portions of the narrative move slowly, with some passages weighed down by dialogue. Readers will nevertheless be intrigued by the underlying concern of just what the Librarians are up to. As Ranulf gleans information from Immortals—beings who had “always been there, waiting to be summoned”—his quest for knowledge takes unexpected turns. A few statements prove subtly insightful: “Perfect can only be one thing, but imperfect allows a wide range of possibilities.” Other comments, however, come across as less enthralling: “His inclinations are to be sociable. He approaches her, but she growls, putting him off. Each time, she shows her dislike for company.”