Bennett Easton, a former school teacher and software trainer, is a freelance writer from Austin, Texas. He is a member of the Writers’ League of Texas and the Texas Authors Association. He has a B.A. in philosophy from Washington & Lee University and dabbles in politics. He has run for State Representative several times. A rebel and a seeker, he strives to create stories that are uplifting and enlightening. When he’s not writing, he loves spending time with his sons Sam and Henry. Beyond that, he enjoys camping and hiking, biking, noodling on his guitar, and discussing metaphysics & cosmology with anybody who is willing to engage.

“An imaginative debut with memorable characters and a pleasant dose of idealism.”
– Kirkus Reviews 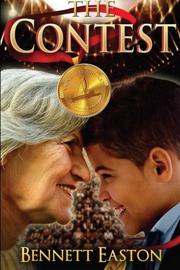 In Easton’s debut novel, an elderly philanthropist questions the success of her life’s work and launches a worldwide contest to help solve the problems plaguing mankind.

Eighty-seven-year-old Minerva Bennett wonders whether she’s made the best choices in how she’s used her billions. After heading a charitable foundation for decades, she decides to give away more than $5 billion in what a friend calls “the most ambitious social experiment of all time,” a contest soliciting manifestos that explain how to solve some of the world’s most pressing concerns. The issues range from religious extremism and climate change to illiteracy and drug addiction. The contest is open to the first 1,000 teams who sign up, and each team must include six males and six females, at least two of them children. Contest mania ensues across the globe. Easton does a fine job conjuring a wealthy visionary who dares to think originally about her giving. The characterizations are quite good, with a large cast of players that is both distinct and memorable, including Henry Godfrey, Minerva’s great-nephew and a middle school teacher with inspiring students; Malcolm Conroy, the enigmatic man who leads the search for contest judges; and Catherine Myers, Minerva’s executive assistant. While the book’s premise is a provocative one, some wooden dialogue occasionally makes for tedious reading. For instance, when Minerva explains to the foundation board that she’s trying a new tactic, she says, “Rather than imparting solutions to people, and helping them to bridge a myriad of difficulties, we have created dependencies and institutionalized their problems.” Since the book’s intrigue comes mainly from finding out who wins the contest and prize money, it’s a welcome addition to the storyline when a meaty subplot emerges involving deadly attempts to thwart the contest’s success. Better editing would catch grammatical errors and typos, but despite a few shortcomings, the tale is big and ambitious—like the contest itself.

An imaginative debut with memorable characters and a pleasant dose of idealism.