When you’ve lived in New Jersey your whole life, you have no choice but to interact with real life characters.

But it wasn’t until after Bentz Deyo graduated from Drew University, where his passion for writing began, that the idea came. The idea that birthed The UnDelightened, a story of a teenage boy whose biggest failure may end up being his greatest asset. The idea where pieces of all those real life characters helped bring Deyo’s fictional characters to life.

Deyo lives in NJ with his wife and daughter. He's currently writing Book 3 of the 5-part UnDelightened Series. Book 2, The UnLeashed, is due out Jan 13, 2017.

“...great characterization throughout will have readers eager for the next volume.”
– Kirkus Reviews 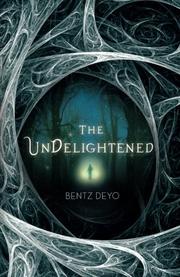 In this teen debut, a young agent of Darkness begins to question his family’s war against the Light.

Last year, on his 17th birthday, Leam Holt of Harbing, New Jersey, failed to delighten. The ritual to darken his soul and endow him with powerful magic didn’t succeed, and he’s an embarrassment to his sorcerer parents. Leam must now watch his younger brother Zach’s delightenment, to be performed by Gideon, leader of the Darkness. Meanwhile, in nearby Cliff Edge, recent high school grad Eloa Frost finds evidence of her father’s violent kidnapping. As an agent of Light, Jace Frost has an enchanted safe—and it’s been broken into. Eloa rushes to her grandparents’ home and soon meets with Porlo, a friend of her father’s, who gives her a magical pendant and encourages her to join the battle against Darkness. Back in Harbing, Gideon delightens Zach but is also impressed by Leam’s knowledge of the Prophecy, which says that someone special will aid them in the war. Gideon instructs Leam to meet with his associate for his “first real day of school.” The meeting, which proves that Leam still has great magical potential, ends with him crashing into Eloa, who’s jogging through the park. Has coincidence kick-started their relationship, or is it something more potent? Debut author Deyo crafts a grim, emotionally hefty narrative that features more vile characters than not. The opening sequence has the brothers kidnapping a grown woman for Zach’s private pleasure. But Deyo frequently implies rather than details how evil the Darkness is, as when readers learn that they’ve “created a serum for...children that increases their tendency to bully weaker peers.” The best of Deyo’s prose is a parade of gnarly textures; Gideon’s eyes are “Dead dull, but sparking crazy.” Yet some metaphors are too unwieldy, as when someone has “a terrifying thought, a thought that flat-lined his smile fire quick and pounded away at his heart.” Nevertheless, great characterization throughout will have readers eager for the next volume.

Intense reading for those tired of Harry Potter’s goody-two-shoes ways.

"I am not worried, Harry," said Dumbledore, his voice a little stronger despite the freezing water, "I am with you."