Bernadette Giacomazzo is an editor, writer, and photographer whose work has appeared in The Source, XXL, HipHopWired, Teen Vogue, People, Us Weekly, The Los Angeles Times, The New York Post, and more. She is also the author of The Uprising series, whose first book, "The Gathering," is out now. Giacomazzo also contributed a story to the upcoming Beyonce Knowles anthology, "The King Bey Bible," and is the co-author of "Swimming with Sharks: A Real-World, How-To Guide to Success (and Failure) in the Business of Music (in the 21st Century)." Find her online at http://www.bernadettegiacomazzo.com 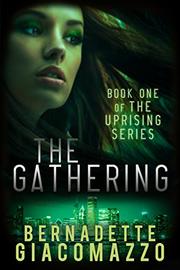 In the first installment of Giacomazzo’s (co-author: Swimming with Sharks, 2015) dystopian series set in the near future, a group resists a dictator who’s taken control of America.

It’s been over two decades since New York City resident Jamie Ryan was frontman for the popular glam-rock band Faust. Since that time, the country has come under the control of the authoritarian regime of Roger Cunningham, who’s known as “Emperor.” After winning a presidential election, Cunningham declared a state of emergency; members of his police force, The Cabal, now use psychic powers known as “psi”— capable of stripping “your spiritual life force, your psychic energy, the very aura that made an individual unique”—to make citizens docile. Jamie became a Cabal officer to support his pregnant wife, Angelique Denham. But after a fellow officer killed Angelique, Jamie and two other officers, Basile Perrinault and Kanoa Shinomura, defied Emperor and went on the run. Since then, they’ve been covertly killing other Cabal members; now, they’re planning to bring together other insurgent groups, including one called The Uprising, to stand against Emperor. Jamie also finds out that Ramira “Rosie” Diaz, the ex-girlfriend of late Faust bassist Jordan Barker, is now Emperor’s wife; Emperor’s soon-to-be-betrothed stepdaughter, Evanora Joy Diaz-Barker, is Jordan’s child. Giacomazzo wisely condenses the plot to its essentials; the number of characters is relatively small, and although Emperor has taken over the entire country, the narrative is centered in New York. The coarse language throughout and sharp instances of violence make the novel decidedly adult in tone. There’s a notable theme of family as Basile fights for loved ones he’s lost and Evanora acts as Jamie’s surrogate daughter. Moreover, the story adeptly tackles topical issues: Emperor’s “therapy,” for example, essentially aims to turn gay people straight. The plentiful dialogue is rife with slang, clipped sentences, and light insults. Nevertheless, very little happens in this first book, leaving readers to wait for particulars on such things as The Trials (tests for joining The Cabal) and Faust’s decision to disband.

Minimal action, but the focused setting and rounded characters will prime readers for further stories.

Swimming with Sharks: The 10th Anniversary Edition: A Real-World, How-To Guide to Success (& Failure) in the Business of Music (

On the 10th anniversary of its initial release, Swimming with Sharks: A Real World, How To Guide to Success (and Failure) in the Business of Music (in the 21st Century) has been updated & re-released, but still retains all its original wit & wisdom. What began as a conversation on MySpace earned countless indie book accolades & awards, launched the successful mainstream careers of its two authors, and taught countless musicians about the in's and out's of the shark-infested business of music. The new edition of the book now features sound advice for music industry professionals, exclusive stories about your favorite celebrities, and insightful updates about the original cast of characters from the first edition of the book. But in between the tales of the tape about celebrities from Kanye West (very nice) to Nick Lachey (not so much), and the hilarious quips from other industry insiders, is a book that's chock full of essential tips that every musician & aspiring industry professional -- regardless of genre -- can take to heart and apply to his/her successful entertainment industry career...without getting eaten by the industry's sharks.
Published: Sept. 2, 2015
ISBN: 978-1517179809