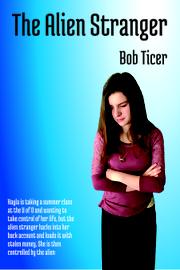 Kayla Chalet is taking classes at the University of Oregon. She and her mom, Darcy, are struggling with debt from medical expenses due to the latter’s cancer. One day, while Darcy’s walking home from class, a man attacks and tries to rape her. Thankfully, a stranger intercedes—knocking the attacker out with a “barrel like device”—but he tells Kayla that he wants to avoid the police, as he’s neither a citizen nor carrying proper identification. She suggests that he’s an alien, and he confirms this by saying “I am an alien stranger.” They part ways, but she soon confides in her mother, who tells the police about the rape attempt. A detective believes that her savior may be “a spy with advanced technology.” Soon, the FBI is looking into the incident as well. Then the stranger communicates with Kayla telepathically. After she rescues him from a potential drowning, he rewards her with millions of dollars, which gradually appear in her bank account. Kayla and her classmates want to use the funds to combat climate change, but it’s later revealed that the money once belonged to drug-dealing terrorists, who want it back. Kayla’s relatable struggle for control of her life drives much of the story; the stranger tries to control her with money, and the authorities attempt to do so with threats of prison time. Ticer wisely keeps the stranger ambiguous, keeping readers constantly unsure about his trustworthiness. However, several prolonged scenes, including a discussion of the Big Bang and a sequence in which Kayla’s classmate John von Lay teaches her the game of billiards, have no bearing on the plot. Other parts are simply confusing; for example, at one point, the stranger asks Kayla to sell an extravagant necklace because he’s “in need of money,” although he later manages to transfer a fortune to Kayla’s account. Nevertheless, the ending retains some engaging ambiguity while still offering resolution.

An intriguing novel with a tenacious protagonist, despite a few narrative stumbles.