Brad Ulreich is a Washington D.C.-based artist, musician, and writer. His first novel -- The Unearthly Travails of Gabriel McGregor -- was inspired by a sleepless night, and the feverish, fantastical images that kept him awake. By morning, the outline was written and the writing of the book had begun.

“The novel’s dialogue is particularly strong, and Gabriel’s words ring true as those of a know-it-all child who doesn’t quite know it all yet.”
– Kirkus Reviews 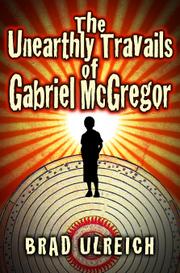 The Unearthly Travails of Gabriel McGregor

A debut children’s fantasy book that delves into the afterlife.

Precocious 11-year-old Gabriel McGregor lives a normal life in the suburban home he shares with his hyperactive younger sister, Emma, and his quiet, intelligent mother, Susan. He knows next to nothing about his stern scientist father, who died when Gabriel was 5 years old. Gabriel allows his ego and intellect to distance himself from his family and from other people. Things change forever after Gabriel invades his dead father’s forbidden laboratory and, in a freak accident, Emma electrocutes him. The story moves from the McGregors’ sad, mildly quirky world into a sort of Dante’s Inferno for kids, as the spirit of the deceased Gabriel wanders through strange vistas of the afterlife (featuring, among other things, talking paper cups and flying sneakers). When he’s wrongly sent to Hell to be judged by Satan, he tries to find a way to return to a life that he never fully appreciated. As Gabriel overcomes dangers and learns lessons, he finds a helper in a two-headed ram named LugWig (or, rather, one head is named Lug, the other Wig); he also finds himself pursued by the demonic Payne and his hellhound, Mabel. Ultimately, Gabriel gets the answers he’s been looking for, as well as a few that he hadn’t expected. The book’s breezy, chatty narrative style has a faint hint of Lemony Snicket’s work, and the storyline is wryly self-referential throughout; for example, Gabriel always knows when he’s learning a lesson, but he recognizes their value all the same. The characters are smartly written, with a light touch even in the darkest moments; LugWig, the book’s “id” and “ego” to Gabriel’s burgeoning “superego,” is a particular standout. The novel’s dialogue is particularly strong, and Gabriel’s words ring true as those of a know-it-all child who doesn’t quite know it all yet.

A gently enjoyable fantasy with worthwhile lessons for young readers.