Brendan Williams earned his M.A. in criminal justice at Washington State University and his J.D. at the University of Washington. A licensed attorney since 1998, Williams has run two statewide long-term care associations; worked as general counsel for a national trade association; and served as a three-term state representative (2005-10) and a deputy insurance commissioner in the state of Washington.

In passing 27 bills into law, Williams received top-legislator recognition for eight statewide organizations, and was a Toll Fellow for the Council of State Governments in 2006 – one of 40 state leaders chosen nationwide.

A prolific columnist, Williams has had over 80 columns published in newspapers in Iowa, New Hampshire, and Washington, as well as in The Hill and USA Today. Much of his writing has focused on health care, particularly Medicaid and long-term care.

Williams is also the author of five published law review articles, on criminal justice and insurance topics, with three more articles accepted in 2018 for forthcoming publication.

Battle over Obamacare: 2009-17 is the second effort by Williams to share insights derived from being a state insurance regulator and seeing Affordable Care Act implementation up close. He withdrew an earlier book after an employer feared it would jeopardize its regulatory relationships. In his best-selling book Listen, Liberal, Thomas Frank credited Williams: “Brendan Williams explained Obamacare to me.”

Williams lives in New Hampshire, and is the father of a teenage son. His next book is a memoir.

“Williams’ report is astute and relevant throughout, as he highlights the debate between those eager to preserve Obama’s legacy and those who support President Donald Trump, who has insisted that a reformed health care program will more efficiently serve the American people. Finally, the author opines on the future of the act amid a labyrinth of bureaucracy, insurer dominance, and political dissension.”
– Kirkus Reviews 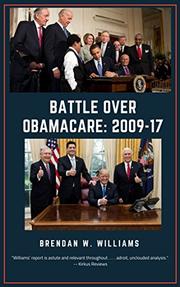 A thorough overview of the 2010 Patient Protection and Affordable Care Act, aka Obamacare, in its later years.

Williams (Compromised, 2015), a former three-term Washington state representative and a former deputy insurance commissioner, follows up on his debut effort, which charted the initial passage of Obamacare. Here, he offers an intelligent and thought-provoking examination of the health care legislation’s strategic implementation as well as its obstacles, including repeal efforts. The book focuses on the period from 2009 to 2017, winding through the act’s serpentine specifics. Along the way, Williams looks at the collective history of four presidential administrations and their advocacy for health care reform. He also stresses that the dismantling of the act has already begun, as opposing Republican legislators, as well as the Trump administration, continue to search for misinterpretations, workarounds, and loopholes; the 2017 GOP tax bill repealed the act’s individual insurance mandate starting in 2019. Readers who remain baffled by its complexities will appreciate the author’s plainspoken, thoughtful analysis, replete with descriptions of the varied tiers of coverage and benefits packages, and walk-throughs to help readers understand how things could radically change. Some chapters solely address dizzying political challenges or such vexing issues as prescription pricing, while others focus on the specific pitfalls of state-based exchanges, Medicaid expansion, and abortion coverage. Some of these sections could prove to be too dryly academic and technical for readers hoping for lay interpretations. Even so, Williams’ report is astute and relevant throughout, as he highlights the debate between those eager to preserve Obama’s legacy and those who support President Donald Trump, who has insisted that a reformed health care program will more efficiently serve the American people. Finally, the author opines on the future of the act amid a labyrinth of bureaucracy, insurer dominance, and political dissension.

Another volume of adroit, unclouded analysis. 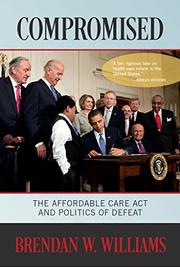 Compromised: The Affordable Care Act and Politics of Defeat

An insider’s account of the historic passage of Obamacare.

Debut author Williams was a three-term Democratic state representative and the deputy to the insurance commissioner of Washington state, so he’s well-positioned to write a book about the creation, passage, and aftermath of the 2010 Patient Protection and Affordable Care Act. He begins with a reflection on the contentious state of political affairs regarding health care: how did a powerful, idealistic Democrat-controlled Congress produce such an unpopular, unwieldy piece of legislation? And how was the original ideal of a single-payer system abandoned so quickly and thoroughly? Williams walks readers through the labyrinth of political compromises that ultimately diluted the original reformist spirit of the ACA and, in his view, rendered it a dubious achievement. His analysis is consistently rigorous, and it’s particularly strong when it turns to complex issues such as state-run health insurance exchanges; his insider knowledge of Washington state gives him a clear perch from which to appraise its experiments in making the ACA work. He also makes a credible, nonpartisan effort to pinpoint the law’s structural inadequacies and details how rampant dishonesty about the ACA undermined the public’s already shaky trust in government: “what sort of protection was a policy that, even after a tax subsidy toward premiums, required a $6,600 deductible before care could even be accessed?” Overall, Williams’ examination might prove too wonkish for average readers; not many will relish an extended discussion of “medical loss ratios,” for example. But for those who want a detailed investigation into the internal machinations of the ACA, this is a well-documented assessment. Williams can be reductive when he interprets the opportunistic motives of politicians with whom he disagrees. However, he proves to be a more than competent guide through the murkiest of legislative waters.

A fair, rigorous take on health care reform in the United States.