Brian Harris is a writer of both humorous non-fiction and plays. He co-wrote Lay Low and Don’t Make the Big Mistake, a business humor book published by Simon and Schuster, as well as the Off-Broadway dark comedy Tall Grass, published by Samuel French. His plays have won awards in NY theater, including winning the Strawberry One-Act Festival twice and the Jean Dalrymple Award for Best Comedy Playwright. He has an MBA from the University of Chicago and worked for most of his career as a Wall Street analyst covering the airline sector. He lives in Miami Beach with his wife, daughter, and puppy. He is currently at work on the sequel to Calling Mr. Beige. 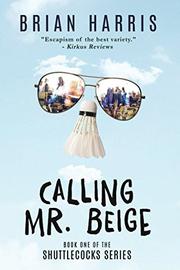 In this comedic novel, a man vainly tries to get people’s attention.

Hollywood actor Tad Mortriciano receives too much devotion: from his fans, from his dog, and from his overbearing mother. But that all starts to change once the odd, shuttlecock-shaped birthmark on his shoulder begins to darken. Suddenly he can’t get anyone to give him the time of day. He gets rejected for movie roles; fans start to snub him; and his relationships fall apart. People seem unable to grasp what he’s saying or to focus on him at all. His new anonymity is so strong he’s able to resolve a police standoff by simply walking in and freeing the hostages. It gets to the point that when he is greeted by a woman in the library sporting pigtails, dental headgear, and a boom box, Tad just assumes that she’s speaking to someone else. It turns out Angela is in the exact same position as Tad: they are both “Low-Impactors. Folks who others have a hard time paying attention to.” She even has the same shuttlecock-shaped birthmark that appears to be the key to their peculiar situation. One theory is that they’re demons. Another, that they’re aliens. All Angela knows is that they’re being pursued by the Monitors: the only people who can see Low-Impactors and, for some reason, mean to harm them. Angela is helping to organize Low-Impactors who seek to protect themselves in an existential struggle that they are only just beginning to understand. In this first installment of a series, Harris (Tall Grass, 2008, etc.) writes in a sharp, playful prose that fills out this absurd world with color and humor. “It’s obvious,” goes one ally’s alien theory. “You both have red hair, you’re of similar ages, both put up for adoption about the same time, you both have the lunar orbiter birthmark.” The author leans into the strangeness of the premise, delving into an adventure that is simultaneously cartoonish and compelling. The characters are big and fun; the stakes are high but tongue-in-cheek; and the reading experience is escapism of the best variety.

A delightful, amusing fantasy about folks whom everyone ignores.

More daring than Dilbert, more subversive than Marx, this ultimate manifesto for millions of lazy "workers" at every level presents the tips, tactics, and techniques for reclaiming lives, sanity--and mid-day naps. Featuring inspiring profiles of famous lazy people and a lexicon of indispensable words to buff up a shabby resume, this book is truly a guide to life in the slow lane. 20 line drawings.
Published: Aug. 29, 1997
ISBN: 978-0684834917

Flexible Casting: 2m, 1f or 8m, 4f/Simple Sets Monster Plays is a supernatural comedy comprised of four one-act plays. Each play requires two males and a female, and the same three actors can play the roles for each play. A vampire, a demon, a werewolf, an alien, a wizard, a murderer, part science-fiction, part fantasy, the plays can be performed individually or together and are perfect for a fun Halloween show. The Pattern was originally performed during the 2007 Strawberry One-Act Festival, winning the contest. All four plays were presented together at Ft. Lauderdale’s Empire Stage as The Monster Project (2013) produced by The Playgroup and Empire Stage. THE PATTERN Sunny brings her date to a psychiatrist to make sure she’s not falling into old patterns. But maybe she’s found a new one. THE GRANDFATHER Maury’s gaming is taken to another level when his grandfather moves in. THE WRONG STUFF Too much time on a space ship leads to strange pastimes. THE BINDER Things heat up when Roger gives Jennifer a present with a mysterious inscription.
Published: Sept. 25, 2017
ISBN: 978-1549830136

Dark Comedy / Flexible Casting; 2m, 1f or 6m, 3f / Simple Sets. Tall Grass is a dark comedy comprised of three one-act plays. Each play requires two males and a female and the same three actors can play the roles for each play. THE BUSINESS PROPOSAL begins with a botched marriage proposal by a nice young man to his type-A girlfriend, who instead informs him that she has just accepted a position to become his boss. Over the next six-months the two try to sort out what they really want out of their professional and personal lives. The solution comes as a surprise, both to themselves and to the audience. The play also features a comic waiter and some voice-overs which can be done by the same actor. THE GERBIL is the story of a burglar caught breaking into the home of a dysfunctional couple, whose love for their daughter is the glue keeping their marriage together. The brutal ending reveals the harm their marriage has taken on the daughter, although she never appears on stage. In TALL GRASS we find an octogenarian couple fighting to maintain their independence. The arrival of a mysterious social worker tests the true extent of their resolve.
Published: April 30, 2008
ISBN: 978-0573662454