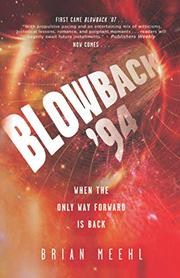 This YA novel concludes a time-travel trilogy with a trip back to belle epoque Paris.

High school junior and music nerd Iris Jongler-Jinks has already accidentally used her family’s heirloom cor anglais (an English horn) to send people back to 1907 and 1863. The latter trip, taken by her twin brother, Arky, was supposed to help them find their mother, the missing astrophysicist Dr. Octavia Jongler. But Arky came back empty-handed. Now it’s finally Iris’ turn. When the so-called Horn of Angels begins to play on its own, the mists that flow from it carry her back to Paris in 1894, at the height of the belle epoque. The only problem is that Arky has somehow traveled back with her: “It wasn’t fair. He’d had his time voyage; why did he have to spoil hers?” Luckily, they quickly get wind of a Madame Jongler who performs as a spider woman at the famous Moulin Rouge. They are finally reunited with Octavia, but bringing her back to the present is not so simple. “While a Jongler can use the cor anglais to send a troubled soul to the past,” goes the legend, “the voyager must discover what’s needed from the past on their own.” Stuck in one of the past’s most colorful locales, the twins must find the lesson that they’re all supposed to learn before they can go home—if they even want to go home at all. Meehl’s prose mixes humor with sumptuous period details: “When the out-of-control bicyclist just missed an elderly man in the street, the old man shook his cane at the two-wheeled terrorist and yelled, ‘There should be a law against those damn machines!’ ” The novel features the requisite appearances by period figures like Degas and Toulouse-Lautrec, and fans of the series will enjoy watching Iris excitedly imbibe the culture and music of the City of Light. Though the pace sometimes feels a bit slow, the world is rich enough—and the characters entertaining enough—to carry this tale to a conclusion that should satisfy those who have been with the indefatigable Jongler-Jinkses all along.

A family-centered time-travel adventure with a lot of heart. 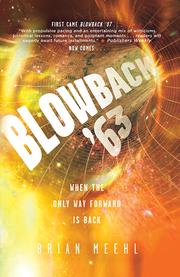 In this YA sequel, twins embroil themselves in further time-travel high jinks while searching for their mother.

Astrophysicist Dr. Octavia Jongler has been lost in time for over a year. Her twins, North High School juniors Iris and Arky Jongler-Jinks, possess the device that sent her to another era—an enchanted cor anglais, or English horn. While Iris experiments with the instrument to learn more about their mother’s location, Arky focuses on his college application essay. He travels with his father, history professor Howard Jinks, to Fredericksburg, Virginia, for a Civil War re-enactment that may inspire his essay. Later, in a baseball game between North High and City High, Arky’s friend Danny Bender accidentally hits former classmate Rafael Santeiro in the head with a pitch. After a brawl between the teams ends the game, a gang of City High teens hunts for Danny at his dad’s junkyard. Iris, meanwhile, believes that finding her mother’s journal (The Book of Twins) and a disc of grenadilla wood proves that the cor anglais is about to work its magic again. As Arky rushes to save Danny from Rafael’s friends, Howard catches Iris handling the instrument. He asks her to play it—in memory of Octavia—and as she does, its mists cocoon Arky and Danny, sending them back to 1863. In his energetically plotted sequel, Meehl (Blowback ’07, 2016) once again merges his love of history and sports for a winsome adventure. Nevertheless, upon finding soldiers encamped in 1863, Arky compares them to the enthusiasts back home and sees “gaunt masks of darkened hide or unruly whiskers that veiled the face-carving effects of war.” But overall, Meehl weighs his narrative in favor of baseball, not war, exploring the game’s early days of Massachusetts rules, which involved overhand pitching and “plugging” runners with the ball. In the present, Iris and a boy named Matt Grinnell begin an adorably awkward courtship as only a music nerd and a jock can. Hints regarding Octavia persist, but locating her won’t matter if Arky damages the Jongler-Jinks lineage. A perfect cliffhanger blows readers toward the next installment.

A quirky and engaging crossroads for fans of baseball, the Civil War, and time travel. 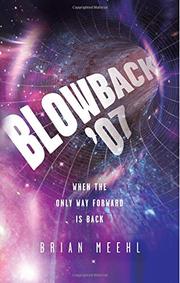 A YA adventure finds a high school football star stuck in the past thanks to a mysterious musical instrument.

North High School students Arky and Iris are twins from the accomplished Jongler-Jinks family. Their father, Howard Jinks, is a university history professor, and their mother, Dr. Octavia Jongler, is an astrophysicist. Jongler, however, has been missing without a trace for a year. In a state of continuous coping, Howard indulges his passion for the Civil War and attends a weekend re-enactment. It also happens to be the Friday night of an important semifinal football game between the North High Cyclones and the Lakeside Spartans. When the Cyclones win, Arky throws a party for his best friends, Danny Bender, a defensive back, and Matt Grinnell, the star quarterback. The party ends early when a scandal involving a private video of Kelly, Matt’s girlfriend, erupts. Matt tries to walk home but returns to knock on Iris’ door. He begs her to play the oboe, which the jock finds beautiful. Instead, she plays her cor anglais, a family heirloom that comes to possess her. Mist pours from the instrument’s bell, engulfs Matt, and causes him to vanish. Meehl (Suck It Up and Die, 2013, etc.) has crafted a sparkling tale from both unique and time-tested elements. His layered characterization unfolds wonderfully, as the narrative focus slides from the bickering twins to Matt, the talented footballer who’s begun to think he plays just to satisfy his father’s obsession with the game. The plot kicks in as the author sends Matt back in time—via the enchanted cor anglais—to 1907, when football had a different set of rules, equipment, and cultural value. Meehl’s love of history and sport combine to tell not only Matt’s story, but also Olympian Jim Thorpe’s. As a young man, Thorpe played football for the Carlisle Indian Industrial School of Pennsylvania. A bittersweet ending sets up the second volume in a trilogy.

A vibrant time-travel tale that offers inventive storytelling along with sports, romance, and secrets. 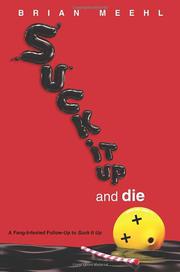 SUCK IT UP AND DIE

The sequel to 2008’s Suck It Up fails to match its predecessor’s charm.

Now that vampires have come forward and learned to walk in the sun, it’s time to campaign for equal rights. But Morning McCobb, geeky vampire spokesperson, just wants to hang with his EB (eternal beloved) Portia and work on his Lifer (human) dream of firefighting. Sadly, there’s no rest for the immortal; villain Ikor DeThanatos is back, teamed up with a Palin-esque politician who hates vampires. Chock full of bad puns, a tensionless love story and underlying messages that come across more pointed than a hawthorn stake, this won’t garner new fans (and there’s almost no recap to orient newcomers, anyway). Messy mythology (the oldest vampires can sustain themselves by transforming part of their body into a creature they can then drink from) and unexpected shifts in character don’t help (tough-girl vamp Rachel Capilarus becomes a daffy hippie). Meehl’s wordplay (there’s a glossary for the acronyms, initialisms and made-up words) and humor are out in full force, and there are moments of genuine sweetness packed into the campy, inconsistent story.

Fans of the first may appreciate the happy ending, but most will wonder why the lily needed gilding. 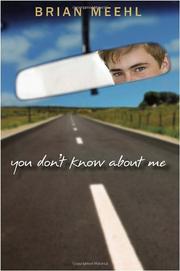 YOU DON'T KNOW ABOUT ME

Home-schooled 16-year-old Jesus freak Billy Allbright leaves his overprotective mom to embark on a geocaching treasure hunt through the western United States. His aim? To uncover the truth about his dead Mark Twain–scholar father and to locate a valuable manuscript Twain supposedly penned as the sequel to The Adventures of Huckleberry Finn. References to the classic run (amok) from the obvious—a lovable, gay, African-American major-league baseball player sidekick named Ruah—to more subtle ones that connect religion, gender and love. Despite some roadblocks, Meehl spins a complex, thought-provoking plot in which the duo’s spiritual journeys mirror their physical hunt. The meat lies in their heady conversations on the road. These platitude-filled interludes on religion and sexuality go on for pages, however, and may cause readers to skip to get to the action. Characterizations occasionally feel uneven, especially when Billy makes references to things like SparkNotes and technology that neither his mother nor his background would allow. Meehl also occasionally stumbles over language: Billy’s dad leaves clues in the form of hokey, clunky, rhyming couplets that link Twain’s work to the hunt. Still, the work’s ambition is admirable, and readers who have grown tired of the supernatural and the dystopic will be thrilled to sink their teeth and their brains into reality. (Fiction. 14 & up) 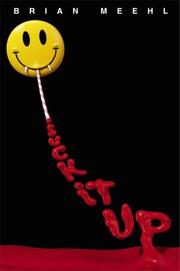 Another title in the growing category of such non-traditional vampire novels. Meehl’s vampires (called Leaguers) walk in the sunlight after conquering “solar phobia,” adhere to the motto, “Drink culture, not life,” and seek recognition as a minority group. To test whether the world is ready for them to come out, they’ve chosen spokesvamp Morning McCobb, an accidental vampire who only drinks “BloodLite” (a soy substitute) and whose vampirism can’t hide his inner geek. Under the guidance of the Leaguer leader, Morning joins forces with PR whiz Penny Dredful—but her filmmaker daughter awakens Morning’s bloodlust. Meanwhile, a loner vamp tries to bring Morning down. After an exposition-heavy start, this settles into an enjoyable romp. Morning references comic-book heroes and wants to be a firefighter (inspired by 9/11); he also struggles with remaining himself in the face of fame. The text sometimes relies too much on wordplay but delivers with appealing characters and an original vampire world. Delightful for those who like their romance vaguely paranormal, their adventure romantic and their vampires defanged. (Fantasy/humor. 12 & up) 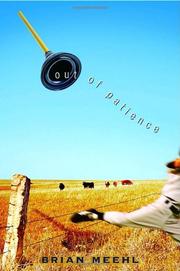 Meehl leads Holes fans into familiar territory with this tale of an everyteen whose intention to leave home ASAP is ultimately modified by events. Jake Waters has spent all his life in Patience, an isolated western town that has been dying ever since outlaw trouble in the 19th century resulted in a curse and a misplaced trove of buried treasure. (Sound familiar?) He has little on his mind beyond doing well in the town’s World Series. Of the league’s eight players, Jake is third best behind his rivalrous friends Howie (scion of the local fertilizer processing plant’s owner) and Cricket (daughter of Pakistani parents), and making good on his vow to escape both Patience and the plans of his father, the town plumber, to open a museum of toilets. Matters come to a head (as it were) after the Plunger of Destiny, which had played a key role in the original curse, resurfaces, followed by a tornado that leaves Patience hip deep in its major industrial product, and the arrival of (more déjà vu) a witchy government official determined to find the treasure. Featuring likeably human main characters, a colorful supporting cast, memorably offbeat set pieces and a credible small-town atmosphere, this debut should leave plenty of readers flushed with laughter. (Fiction. 11-13)

"Is it our chief aim in life to avoid risks?"

YOU DON'T KNOW ABOUT ME: Blue Ribbon: Bulletin for the Center for Children's Books, 2011