Brian Oldham was born in Clarion, Iowa. He moved to Southern California with his family when he was five. He lived in Southern California till he was drafted into the military. He served in and out of Vietnam from 1966-1971. As with many veterans his return was difficult. He worked at various jobs and had an extreme coaching (adventure coaching) business till the mid 1980’s when he found a career in the investment and insurance world. That was his home for the next 30 years. He is married and has a 25-year-old son. He currently lives in Orange County, California.

“Pathos-laden vigilantes are always intriguing, of course, and in this novel, Oldham has created one who’s a tangle of unresolved trauma. The author writes in a muscular prose befitting his imposing protagonist (“the world was at war; a war against evil, against one another.”
– Kirkus Reviews 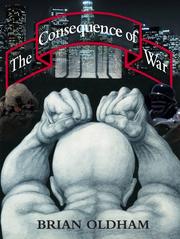 THE CONSEQUENCE OF WAR

Oldham introduces a veteran-turned-vigilante in this gritty debut crime novel.

It’s been two years since Elijah McCoy got home from the war in Afghanistan, but he hasn’t been at peace. Living in a hidden apartment in the back of a friend’s warehouse, Elijah works as a union stevedore on the Oakland, California, docks by day while plying a second, secret trade at night. The dock foreman calls him an “executioner,” though Elijah prefers the term “redeemer,” as he secretly helps innocent people to rid themselves of abusers, stalkers, or worse. Initially, Elijah tried not to use too heavy a touch in his work, but when he intervenes in a hate crime and accidentally kills one of the assailants, he finds himself surprised by just how good the act of murder makes him feel. What’s more, the killing seems to fit right in with his recurring nightmare, in which he finds himself inside the chest cavity of a dying man. Elijah’s friend and fellow veteran Juno thinks that Elijah has PTSD and recommends a psychiatrist; indeed, when another “redeemer” job ends in an unnecessary death, Elijah starts to see apparitions and hear voices that encourage him to give in to his dark side. Through Phillip Statham, a gay man whom Elijah rescues from a hate crime, he meets Rick Vargas, an understanding businessman with a sympathetic ear. Rick attempts to help Elijah escape from his own demons, but they may prove to be too much for anyone to overcome. Pathos-laden vigilantes are always intriguing, of course, and in this novel, Oldham has created one who’s a tangle of unresolved trauma. The author writes in a muscular prose befitting his imposing protagonist (“the world was at war; a war against evil, against one another. Everyone was a soldier, some just weren’t aware of it”), although, like Elijah, it softens during more reflective moments: “Rick reached over and put his hand on Elijah’s arm. Elijah flinched but didn’t move away. He felt warmth running up his arm.” The novel’s succinct chapters and quick pacing make the pages fly by even as the point of view jumps between Elijah and the various other characters involved in his escapades. Some aspects of Elijah’s life can sometimes seem far-fetched—for a violent loner, he sure knows a lot of people who are willing to help and speak highly of him. However, there’s something that is inherently compelling in the story of this man who’s maladapted to civilian life. In addition, his unexpected romantic tension with Rick adds another layer of intrigue as Oldham explores their same-sex relationship. Genre tropes abound, and some of the supporting characters feel a bit stock, but the author does manage to find a suitable antagonist for Elijah in the form of a satanic biker gang. Occasionally heavy and always grim, this story may not be everyone’s brand of escapism, but it should please many fans of antihero-driven crime fiction.

A memorable tale of a violent man seeking to heal himself.

Tess of the D'Urbervilles

Retired from the world of Investments and Insurance

Social Justice and Environmental Sustainability (Advocate for these)

An Announcement is made that Washington D.C. is no long the capital of the U.S. Then the Congress and the Supreme Court are sequestered to redefine their mission. The President moves out of the White House. The real government of the U.S. is slowly revealed.