Brigitte was raised in a military family; born in Fort Knox and grew up near Fort Benning. She had some great influencers around her, but like most teens, she didn't appreciate it at the time. She's the founder of Gemini Media and host of Real Things Living Podcast.

One of Brigitte's doctor's once told her she was a zebra among horses...she'll take that as a compliment. She is a two-time breast cancer survivor and diagnosed with a rare benign brain tumor in between. Brigitte's main goal is to "empower others from just surviving to thriving." Health advocacy is one of her passions.

“Cutshall’s prose is informal in tone, and the entire book reads like a friendly, intimate conversation.”
– Kirkus Reviews 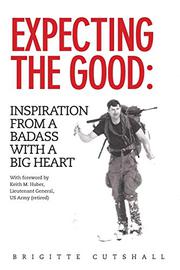 Cutshall (Real Things, 2015) fondly remembers her stepfather and the lessons that he taught her about life.

When the author first met her stepdad, Jean-Luc Nash, in the 1980s, she was only 16 years old and was immediately unimpressed. He was her mother’s third husband, and the teenager assumed that he, as a military man—a graduate of West Point and a decorated soldier who served in the U.S. Army Special Forces—was “chauvinistic.” She also considered him an unnecessary intrusion into what she felt was an otherwise “blissful existence.” However, much to the author’s surprise, Jean-Luc handled her indifference with the “instinctive diplomacy” of an “intrapreneur”—which she defines as someone who “innovates within an existing system that they didn’t build, driven by a larger purpose, and drawn to connect with to others to form a network.” Jean-Luc remained married to Cutshall’s mother for 33 years, until his death, and the author came to cherish her relationship with him, always impressed by how he assumed the role of a “silent leader,” humbly leading by example. From Jean-Luc, Cutshall says, she learned valuable knowledge about courage and responsibility. This brief but often touching remembrance, dotted with personal, black-and-white and color photographs, combines memoir, biography, and self-help. The author collects stories and perspectives from those who knew her stepfather well, including those who attended West Point with him, or later served alongside him. Cutshall’s prose is informal in tone, and the entire book reads like a friendly, intimate conversation. However, this intensely personal, anecdotal account may have difficulty finding a receptive audience outside of its subject’s family and friends. Although Cutshall transcends the personal by relating Jean-Luc’s transformational lessons, the counsel itself is often conventional, if sensible. She does, however, make a convincing case that her stepfather was an impressive man who lived an eventful and heroic life.

A loving account of a family member that will appeal most to those who knew him.

Focusing on the real things will help you get the most out of life. So what is the definition of focusing on real things? You live while you're living because you understand your values and what's truly important.
ISBN: 978-0-9787475-1-0