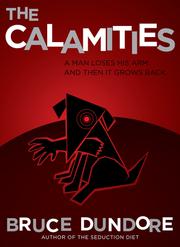 From author Dundore (The Seduction Diet, 2011) comes a sci-fi novel about a bizarre future and one strange man.

When John Smith awakes from a coma, he can’t remember much about his life. Suffering from erectile dysfunction, he also can’t achieve an erection without the aid of a mechanical device. His girlfriend, Marsha, doesn’t seem to mind. Living in a futuristic America that has been rocked by a series of calamities (ranging from plagues to nuclear attacks to a variety of inferior goods), the couple has weathered much worse. After a pack of steroid-enhanced coyotes attacks John, however, his subsequent loss of an arm puts a great strain on the relationship. Believing that his limb will simply grow back, John appears insane to nearly everyone but himself. Since he has no friends to bother with his belief in a regenerating arm (“I don’t have friends. I have doctors and a girlfriend, and those relationships are tenuous at best”), the burden of suffering through such imagination falls mostly on Marsha and John’s dog, Lassie. As fingers begin to emerge from John’s shoulder, the pending question seems to be: Just how crazy is John compared with the madness around him? With a future world that may be too on-the-nose for some (“ticketists” write tickets for all sorts of violations, professional sports have gone ultraviolent, and don’t even bother taking the Suri Cruise Cruiseway), the book nevertheless manages a deep creativity and empathetic protagonist. John may have lost an arm, but he isn’t one to complain about it; he’ll just grow another. Likewise, his relationship may not be one full of passion, but when the alternative is the bleakness of an outside world where packs of enhanced coyotes roam, who can blame John and Marsha for the time they spend together? Frequently sexual (one woman’s business card has a picture of her vagina on it), occasionally gruesome and dotted with spurts of genuine humor, the story culminates in a surprisingly sweet ending.

Managing to be fun in spite of a bleak storyline, the novel is worthy of comparison to wacky/sad futures such as Gary Shteyngart’s Super Sad True Love Story (2011).