Bruce Joel Brittain is an author, songwriter and musician. He earned a journalism degree in 1969 and then served three years on active duty in the U.S. Army, primarily as a journalist. His post-military career included creative copywriting, press relations and consumer research. In the latter category, he formed his own consultancy in Atlanta, Georgia, where he still lives. He built a successful business and managed it for over two decades. In that capacity, Bruce became a sought-after conference speaker and was frequently interviewed by national media outlets including CNN, The New York Times and NPR among others. He walked away from corporate America to return to his creative roots of music and writing. Bruce’s interest in depression-era history and the timeless issues of human relations created the initial story outline for Brother Daniel’s Good News Revival. 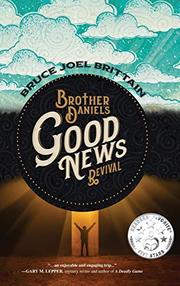 In Brittain’s (Marriage Roulette, 2006) novel, a callow Kentucky teen joins a traveling Christian revival group and learns quickly about the ways of the world.

Young Michael Boone is dropped off with his Aunt Elizabeth in Calhoun, Kentucky, while his parents look for work. Three years later, he’s all but abandoned there and anxious to earn some money. When his aunt takes him to a Christian revival headed by the charismatic Brother Daniel, an opportunity presents itself when the group needs a new truck driver. Initially, Michael is startlingly unworldly—he seems unaware that there are religious believers other than Christians—but he’s quickly disabused of his innocence by the troupe’s decadence. Brother Daniel is unreservedly lecherous, particularly toward very young girls, which Brittain unflinchingly depicts: “Brother Daniel had mastered the skill of touching interesting areas of the female form in such a manner that it was unclear, to those watching, whether it was blatant fondling or merely fatherly care.” Michael begins a romantic relationship with fellow teenager Ruth, one of Mother Daniel’s daughters, who’s desperate to run away and escape the sexual advances of her stepfather, Brother Daniel. Michael thinks about running away with Ruth, but he’s unsure if he truly loves her—and he’s also having sexual trysts with her mother. Then, one day, he’s presented with an uncommon opportunity to leave the revival and secure a better life. Brittain seems finely attuned to the absurdity that can be found in rank hypocrisy, and he expresses it in a manner that’s impressively reminiscent of Tom Wolfe’s work. Brother Daniel, for instance, is portrayed as an avaricious, racist pedophile who nonetheless strenuously preaches the gospel of Jesus. The revival introduces Michael to sexual libertinism, “racial vitriol,” unrestrained alcoholism, and bottomless avarice—but not the Lord. Indeed, if Michael learns anything at all on his trip, it’s how to lie. However, the author also tempers the salaciousness of Michael’s experience with an immersion in canonical literature—a gift bestowed by his hilarious but tantalizingly complex tutor, Bert. Overall, Brittain conveys his story with a literary realism that never devolves into cheap cynicism.

Even Cowgirls Get the Blues

Oh, for Christ's sake, a lie is no less a lie because it is a thousand years old

Brief handbook explaining what to look for in a marriage or long-term partner.

The Chow-hound recounts the story of a B-17 bomber from the Eighth Air Force that was shot down over Normandy in August of 1944. The plane and all nine crewmen were doomed. However, due to business decisions years later, the invention of DNA testing, the on-going gratitude of the people of Normandy for the sacrifice of young Americans and coincidences of over-lapping next of kin, the Chow-hound story emerged from the statistics as a unique episode in a large war.
Published: June 6, 2019
ISBN: 978-1-63393-855-7