Bulent Senocak was born in Izmir, Turkey in November 1954. He was educated at Istanbul University, Turkey. Contributed weekly articles to the Aegean Supplement of Turkish Daily Newspaper "SABAH". His first non fiction book (Izmir - Star of Levant, Levantines, Greeks, Armenians and Jews) published in 2003. His second non fiction book (The Humanized God) published in 2012. His last book (Dus Yollarda Kirildi) is a novel. This book was translated into English (Shattered Dreams) by Brendan Freely and Yelda Turedi. He is married, has a grown up daughter and recently had a grandson. He speaks English, French and moderate German.

“A textured, involving novel about a now-forgotten crisis in the pre-modern Muslim world.”
– Kirkus Reviews 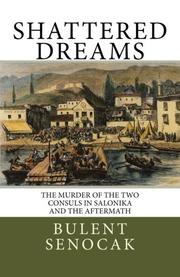 A historical novel about a flash-point event in 19th-century relations between Muslims and the West.

Senocak’s densely researched, atmospheric novel, translated from the Turkish, turns on a little-known but notorious occurrence in the bustling Greek port city of Salonika in 1876. A young woman from Bulgaria, Stefana, converts to Islam after the death of her father, against the wishes of her mother, and goes to live in her Muslim lover’s household. While traveling through Salonika (during a period when it was under Ottoman rule), a crowd of Christians who protest her conversion abduct her, which, in turn, causes a riot among members of the city’s Muslim population. During the unrest, the Muslim crowd seizes the German and French consuls and carries them to a nearby mosque. After some frantic efforts at diplomacy by people on all sides, the mob hacks the consuls to death, sparking an international uproar between the governments of France and Germany and the Ottoman Empire. Senocak efficiently evokes this complicated story by grounding it in a multigenerational family saga, shifting between the buildup to the main event and other scenes a generation later—a canny choice that sustains the narrative tension. At the center of the story is Stefana, but the author also fleshes out many other characters and grippingly portrays the social and diplomatic tensions. Sometimes the characters can be wooden, and, at times, either the author or his translator offers unbelievable dialogue (“I can’t figure out what criteria the British have”). That said, Senocak handles the historical exposition with real skill, and readers never forget that his characters are truly living these events, minute by minute, as they unfold. During the Victorian era, the murder of the consuls threatened to bring on a major clash of civilizations—the Western nations even sent warships to Greek waters. In this book, Senocak does a nice job of balancing the immediacy of the crisis with its longer-term, personal effects.

A textured, involving novel about a now-forgotten crisis in the pre-modern Muslim world.