C.K. Ruppelt lives in Oregon with his wife and two children. After spending most of his work life as a Mechanical Design Engineer, he dabbled for a few years in Program Management before moving on to Product Reliability. His penchant for historical fiction is based on growing up in Europe surrounded by ancient sites, coupled with several years of high-school Latin. He considers himself very lucky for discovering his passion for storytelling and wants to keep writing for the rest of his life. Please check out his personal website at www.ruppelt-pdx.com where much support material for his work can be found. 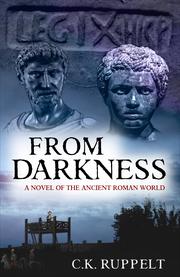 A debut historical novel captures the last years of the Roman Republic from varying perspectives.

The story opens in Rome in 90 B.C.E. with the young Julius Caesar being tutored on the fall of the ancient empires of the Mediterranean. The narrative charts Caesar’s development from eager scholar to esteemed soldier who was awarded a civic crown for saving the lives of his fellow fighters. The story of Caesar’s ongoing rise to power is but one thread in a larger fabric. Ruppelt recognizes that “a huge part” of Caesar’s “fighting force and camp followers consisted of people from all walks of life and all over the Mediterranean.” He therefore sets about creatively reimagining the lives of these individuals. The novel tells the story of Ozalkis and his nephew Adherbal, two Numidian archers who join the Ninth Legion after their family is slaughtered during a tribal raid on their home. The two men are assigned to Hispania, where they are to fight the Celts. The author also examines the theater of war from a Celtic perspective with a focus on female warriors such as Aina, who is battling for her clan’s survival. Other characters, like Timon, a slave, allow Ruppelt to explore a broad cross section of Roman society, from the most powerful to the most vulnerable. This ambitious epic of more than 400 pages skillfully manages an extensive and diverse cast of characters to illuminate a complex, multicultural Roman world. The author has an exceptional eye for detail, and his corresponding depth of research is particularly evident when describing Celtic combat training, where future warriors are instructed on the “twelve doors to the soul.” To discover one of these vulnerable points in their opponents, the young boys and girls are instructed: “Feel the back of your skulls, where the bone ends, and the soft tissue starts. Yes, that’s the point.” Ruppelt’s use of informative and plausible dialogue heightens the narrative effect, transporting readers to the training ground. It is only on occasion that conversations betray a contemporary tenor, for example when the “newly minted commoner” Pulcher comments: “I partied with his younger sister.” Nevertheless, this book, illustrated with maps, diagrams, and a family tree, is a thorough and refreshingly far-reaching interpretation of Roman society that should be of great interest to aficionados of the genre.

A lavishly detailed, character-driven tale about the Roman world.