I'm a native Californian, and I live on the edge of a redwood forest with my husband and assorted cats. I'm down to one at the moment, but considering adopting. When I'm not writing or blogging I'm hiking or practicing yoga.

I wrote my first young adult novel, Sliding on the Edge, after reading a news article about "self-abuse" among ivy league students. It was so disturbing to think young people needed to inflict pain on themselves to cope with their lives that I finally had to write about it. It turned out to be a fictionalized account that I hope offers some insights into the growing problem.

My second novel, The Princess of Las Pulgas, deals with a young girl and her family. They have everything and suddenly nothing.

Alligators Overhead is my first try at a middle grade novel. It's about magick and some uniquely talented alligators. It has garnered praise from readers, and Kirkus Reviews gave it the thumbs up for adventure and an entertaining read.

If you like my books I'd love it if you'd tell me so. If you have some helpful criticism, I'd love that, too! I'm a writer and a reader, but first I'm a learner. Contact me: http://cleemckenziebooks.com

“A short, fun story that will excite both young and old imaginations.”
– Kirkus Reviews 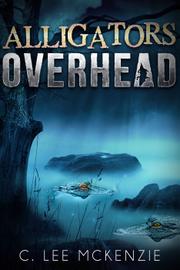 McKenzie pens a swampy middle-grade story full of humor, hauntings, quirky characters and a mystery that continues to develop to the very end.

Twelve-year-old Pete is a small-town kid prone to mischief and trouble. Luckily, his best friend, Weasel, attempts to keep him in line. But when Pete develops a mysterious supernatural power that allows him to make anything he imagines come true, he’s in for some trouble that even he finds difficult to handle. Pete’s aunt knows a bit more about these powers than Pete; she’s convinced he has inherited traits and abilities in witchcraft from his ancestors, something she’d never told him, fearful that he wouldn’t comprehend how to harness his powers at such a young age. As Pete develops an understanding of his new talents, he searches for a way to use them wisely, with Weasel acting as a voice of reason and fully committed to staying by his side. While the themes and plot are certainly based in fantasy, the nature of Weasel and Pete’s relationship is grounded in reality and will be recognizable to young readers who’ve begun to understand the importance of compromise, healthy conflict and teamwork. As the two work together to save the day and solve the biggest mystery their town has ever encountered, they also learn about each other and their own powers to make good choices. In its twists, turns and surprises, the novel reads quickly and should keep the attention of any young middle-grade reader. With fresh language, loads of perky dialogue and unpredictable characters such as witches and talking alligators, McKenzie spins a tale that isn’t just entertaining; it also offers valuable lessons, as the cast of strange characters bond around common goals: save their swampland and deter a crisis. The folksy diction and lyrical, verb-heavy storytelling will leave readers turning the pages all the way to the end, where big surprises await and the real villains are revealed.

A short, fun story that will excite both young and old imaginations.

Where to start is the problem, because nothing begins when it begins and nothing's over when it's over, and everything needs a preface: a preface, a postscript, a chart of simultaneous events.

Sliding On The Edge

Lied to, abused, and abandoned, a suicidal teenager comes to live with her cynical grandmother in mutual distrust until saving a doomed horse brings them together and gives each a reason to live.
Published: April 23, 2009
ISBN: 978-1934813065

The Princess of Las Pulgas

A teen girl's life is turned upside down when her father's death impoverishes her family and forces them to move to a seedy apartment complex in a different town, where she and her brother must adjust to a tough urban high school. Carlie has everything, and then suddenly almost nothing.