I think that people need a certain "something" allowing them to nourish and sustain their unique thoughts and emotions. In my case this "something" is writing.
The fantasy genre has given me so much, allowing me to venture to places and worlds that I never thought the mind was able to reach. 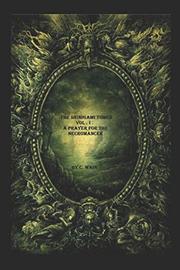 A PRAYER FOR THE NECROMANCER

A debut novel follows a practitioner of black magic with a personal vendetta against a king, whose self-serving plans could precipitate a universe’s destruction.

Kaze Niss, a mortal in the New World, entered into a covenant with Shinigami (or Death God), Lord Aras Keep, 20 years ago. He believed it was the only way to save his father’s kingdom of Watir, which had been corrupted by power-seeking Frizas Kun. As part of Kaze’s deal with Aras, he’s become a blood magic–wielding necromancer and has a simple objective: destroy all blood tomes, books that the Shinigami originally gifted to mortals. If the Oak Gods from the dimension Oserin get a tome, they can open a portal to the Shinigami realm of Blacuir, which would end in devastation across Oar, the primordial universe. In the present day, Kaze evades Frizas, now the Watir king, who wants a tome so he can learn blood magic. Kaze hides out with old friend Ragui and his daughter, Aline. Unfortunately, Frizas unleashes ghouls that lay waste to Ragui’s village, and Kaze, in order to save Aline, makes another arrangement with Aras. The result is Kaze and Aline’s becoming linked so closely that if she dies, so will he. Both undergo yearlong training: Kaze now harnesses the power of the ghoul king while Aline is a necromancer. In the interim, Aras sends vampires and others to impede the Oak Gods from garnering strength with fresh blood and achieving their ultimate goal: to destroy the Shinigami and be the sole divine clan in Oar. Wain wisely centers this fantasy series opener on specific realms and characters, with the possibility of expanding the cast and locales in future volumes. For example, the first installment is set primarily in the New World and Blacuir. They’re only two of Oar’s four dimensions; little is revealed about Oserin or Renic, the demon world. Similarly, backstory is minimal but enlightening: Readers learn about Frizas’ scheme against Kaze’s royal family as well as the reason the protagonist harbors guilt. Though it’s clear Aline is a love interest for Kaze, she’s a dynamic supporting character; from the beginning, she yearns to practice magic in defiance of mortal laws prohibiting women from doing so. Her tie to Kaze is likewise enthralling, as any peril she’s in is a threat to both of them. Wain fills the pages with memorably bold colors, especially Kaze’s purple hair, which is complemented by his magic-infused—and scarlet red—Blood Katana. But the prose also fosters lasting impressions of myriad characters, mortals or otherwise. The ghouls’ initial appearance is particularly striking: “Hairless and with their grey skin filled with pustules and abscesses, they turned against the kneeling mage, gnashing their long, razor-sharp teeth as they walked towards him slowly.” Other characters include genre staples such as orcs, elves, and goblins along with fresher concepts: With all his powers, Kaze is the first demighoul. Meanwhile, the engrossing narrative hints at an impending war.

A PRAYER FOR THE NECROMANCER : 5 Stars by Readers Favorite, 2018

A hidden enemy lurks in the shadows of the everlasting universe. What once was weak, now stands mighty, ready to face the incoming storm which will forever alter the fate of the New World. In this darkness, the village girl has become a new beacon of hope while amidst the crushing waves of destiny, the necromancer stands his grounds, preparing his strongest spells for the war to come. Who will save the Creator? What will happen to the Kingdom of Watir?