Candace Carson is a Deadhead. A hippie since the late 1960s, she was introduced to the Grateful Dead's music in 1972, when she first heard their Workingman's Dead album. She attended her first show in June 1979 and her last in May 1995, just before Jerry Garcia's death. When she's not listening to the Dead, she works as an Iyengar Yoga instructor out of her own studio and also spends time pursuing her photography and painting hobbies. Carson lives in Gunnison Colorado, with her husband. Diary of a Deadhead is her first book.

“The worldview and spirituality discussed here won't be shared by all readers (ditto about her claims about the brilliance of the Grateful Dead); Carson nevertheless offers a compelling narrative of her generation, revealing how baby boomer angst and the 1960s disillusionment created and entire demographic waiting to be enticed away by the psychedelic Pied Piper. This memoir may not be a definitive chronicling of the Deadhead experience, but it's an unexpectedly moving look at one life in which the Dead prove more alluring than anything else. A compact, illuminating memoir of an unapologetic Deadhead.”
– Kirkus Reviews 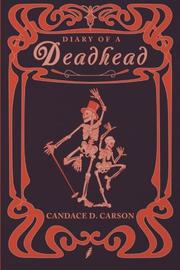 Diary of a Deadhead

In this debut memoir, Carson recounts her decades as a devout fan of the Grateful Dead.

“I think we, the Deadheads, all had an unfilled space in our lives,” writes Carson, remembering the moment she first heard the Grateful Dead, “and we did not realize we were searching for something real and tangible to fill that void.” While the music may not actually be tangible, the subculture that formed around the Grateful Dead during their 30 years of touring was a unique phenomenon in the history of popular culture. Coming from a Chicagoland household marred by the horrors of the Vietnam War, Carson took to the drugs and music of the 1970s at an early age. From first hearing “Workingman’s Dead” in 1972 to first seeing the Dead in 1979 to the death of Jerry Garcia and the end of the era in 1995, Carson recounts her nomadic lifestyle as it intersects with the ever touring jam band. Through personal hardship, spiritual questing, and attempts to deal (or not to deal) with the shifting times around her, the concerts shone like a trail of lanterns along a path that was not always as groovy as the traveler hoped it would be. Unlike the forever-noodling Dead, Carson is possessed of a disciplined succinctness: the book is a mere 112 pages, divided into 24 chapters that skip along at the speed of pop songs. Her voice may initially strike the reader as willfully bubbly, but Carson manages to sneak in dense, searing, insightful summaries of the times and places she found herself along the way. The worldview and spirituality discussed here won’t be shared by all readers (ditto for her claims about the brilliance of the Grateful Dead); Carson nevertheless offers a compelling narrative of her generation, revealing how baby boomer angst and 1960s disillusionment created an entire demographic waiting to be enticed away by a psychedelic Pied Piper. This memoir may not be a definitive chronicling of the Deadhead experience, but it’s an unexpectedly moving look at one life in which the Dead proved more alluring than anything else.

A compact, illuminating memoir of an unapologetic Deadhead.