Carmelo Anaya is a lawyer graduated from the University of Granada and has also studied criminology. He has won the Wilkie Collins Novel Prize and the J & B Prize in Spain. The Ripper is the fourth novel in the series dedicated to Commissar Carrillo. Anaya has been inspired by Jack the Ripper for his latest novel and has recreated the myth in a novel of raging news offering us a story that could happen anywhere in the world. 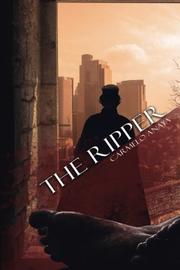 The latest case for Commissioner Carrillo in the city of Baria is a particularly savage murder. Cristiana Stoicescu, a known sex worker, has been mutilated. The commissioner, usually working in tandem with Inspector Malasana, initially looks at the victim’s employers as suspects: Romanian thugs who not only deal in prostitution, but also in other illicit ventures, such as blackmail. It soon becomes abundantly clear that the murderer has the same modus operandi as the infamous Ripper of Whitechapel. Furthermore, Cristiana’s killing occurred on Aug. 31, the same day as the Ripper’s first recorded slaying back in 1888. Carrillo anticipates that a second murder will correspond with the September date of the Ripper’s next killing. His guess is proven right, but he’s unfortunately unable to prevent the murder of another prostitute. Shortly thereafter, the murderer begins sending taunting messages to Carrillo directly, via text messages and handwritten letters. The press starts to mock the police’s inability to ensnare the killer, and soon, the public at large believes that “the new Ripper” has outsmarted authorities. In the meantime, Carrillo sifts through a bevy of suspects, false confessions, and apparent leads that seem to go nowhere. An FBI–approved profile doesn’t shrink the commissioner’s suspect list, which is made up of an array of seedy individuals who are guilty of many transgressions even if they’re not guilty of serial murder. Soon, Carrillo fears that the killer won’t stop at five victims—the number that’s attributed to the Ripper. Indeed, he may never stop at all. Anaya’s novel is, rather appropriately, a dark and haunting affair. The killer is unquestionably vicious, and the fact that he signs off his messages to Carrillo with a derisive giggle (rendered as “Tee hee”) makes him all the more unnerving. The story’s secondary characters are memorable, if generally unsavory, and include everyone from drug dealers and addicts to sexual offenders. Even the police are far from wholesome; Malasana beats up suspects so often that it’s clear that it’s a routine part of his interrogations. There’s a shortage of significant female characters, though, aside from the notable (and tenacious) Inspector Galan of the Deputy Analysis Unit. The lengthy novel closely follows Carrillo’s investigation, which generates a school of red herrings. But none of these subplots is simply abandoned; Carrillo and Malasana always ensure that criminals pay for their crimes, even if they’re not directly connected to the serial slayings. Throughout, Anaya rigorously describes the environment—particularly the effects of late-summer weather in Spain; the characters are persistently burdened by brutal heat that can’t be remedied by shade, tap water, or air-conditioning. However, the text’s English translation from the original Spanish seems uneven. Grammatical errors throughout prove distracting, as do the multitude of Spanish-language sentences with no context. In the end, though, the book’s denouement is wholly satisfying.

A gloomy but distinctive mystery that overcomes occasional snags.

An anonymous received in the police station of Baria puts to the commissioner Carrillo on the track of a possible murder committed a year back: an outrage, the one of a woman to the exit of a restaurant, that could be intentional. A father overcome by pain and resentment; a private detective as shrewd as ambitious; a devout secretary and, above all, a woman who can not contain the love that she encourages in her heart. An investigation that will gradually become entangled until those involved in it become real vermin. "Baria City Blues" is the novel in which the commissar Carrillo, of the Police Headquarters of Baria, a city in eastern Almeria, is made known. The author here displays his genuine doses of irony and sharpness to reveal to the reader the most murky reverse of the established power. To an inquiry into the limits of love, "Baria City Blues" adds an absorbing intrigue that makes each page contain a revelation, a new twist in the plot. A canonical black novel, which is drunk with relish until reaching a surprising outcome.
Published: Jan. 16, 2012
ISBN: 978-8415338260

Fascism and xenophobia have returned to Europe hand in hand with the economic crisis, which reveals the worst of human nature and makes many forget the old democratic values ??(or, perhaps, never really had them?). The Spanish Levante, plagued by North Africans who work on farms, is the ideal place for racism and hatred to emerge many times latent. In the city of Baria, a far-right terrorist group, National Guard, emerges, whose first action is the murder of a Muslim immigrant family. After this murder, a political group, MET, defends the same values ??and principles. Is a new model of fascist parties being born in Europe that has copied the operating systems of former nationalist parties that use violence as a way to coerce state governments? Is it causality that the brutal acts of terrorism occur at the same time as the birth of this political party? Commissar Carrillo has to investigate the murders that are committed in Baria - a city created by Carmelo Anaya as a metaphor for Spanish society suddenly enriched and brutally impoverished - and must face even the powers that should watch over freedom and justice. The commissioner will have to persecute Doctor Cárdenas, incarnation of the new political monsters that sprout in other corners of Europe, such as Greece or France. The Guardian of my Brother shouts the alarm that the old and new risks of fascism that we so far believe and so closely fear must provoke in democratic societies.