Carol Buchanan writes historical Westerns about people forced to make dangerous choices to establish the law when gold, greed, and a vacuum of law led to ruffians’ rule and a tolerance for murder.

Her fascination with the Vigilantes of Montana began when she stood in the Hangman’s Building in Virginia City, Montana, and heard the ropes creak. Much later, with a PhD in English & History, she has researched and written four historical novels about Montana’s Vigilantes.

Collectively known as the Vigilante Quartet, they are God’s Thunderbolt: The Vigilantes of Montana, The Devil in the Bottle, Gold Under Ice, and The Ghost at Beaverhead Rock.

She has won several awards for her work, including both a Spur (2009) and Spur Finalist (2011) awards from the Western Writers of America, and the “Spirit of Dorothy Johnson” award from the Whitefish Library Association in Whitefish, MT (2016).

After long years wandering in urban deserts, she went home to the Flathead Valley in Northwest Montana with her husband, Richard Buchanan.

“Stark is a compelling, complicated hero, one of several finely drawn characters who bring the Old West to life.”
– Kirkus Reviews 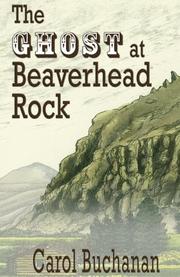 The Ghost at Beaverhead Rock

A Montana Territory lawyer must solve a murder to save his family and salvage his good name.

The final installment of Buchanan’s (Gold Under Ice, 2010, etc.) Vigilante Quartet examines the evolution of Daniel Stark. He made his fortune and settled his father’s debts. Despite some hesitation, he returns to the newly created Montana Territory to wed his lover, Martha McDowell, raise her children, and establish a law practice. To his surprise, Martha is pregnant with his child, and Stark is now the prime suspect in the murder of her first husband. Stark must find the killer so he can clear his name and avoid the hangman’s noose. Luckily, the territory has gained some semblance of civilization in Stark’s absence. Taxes have been levied, a jail has been constructed, and a new chief justice imposes law and order, instructing the vigilantes to hang up their spurs. While Stark is happy to get out of the vigilante business, he remains haunted by the past. He is unable to escape the memories of vigilante hangings, and the smelly specter of a hanged man shadows Stark’s every move. While fending off a ghost and hunting a murderer are more than enough to keep him occupied, Stark gets drawn into another contentious battle: the creation of the territory’s new and vital mining laws. Buchanan offers a murder mystery that is set during a formative time in Montana’s history. It is an absorbing period, when the laws were unclear and so much rested on their creation and enforcement. The story is based on true events, and the author wisely populates the town of Virginia City with characters that really lived or are modeled on those who did (such as Stark). Stark is a compelling, complicated hero, one of several finely drawn characters who bring the Old West to life. Buchanan’s devotion to research is apparent throughout the novel, in detailed conversations between miners about the benefits of using Common Law rather than the Idaho statutes or references to inescapable political conflicts that arise from the continuing Civil War.

A solid addition to the Western genre and a satisfying conclusion to a vigilante series.

The Ghost at Beaverhead Rock: Spirit of Dorothy Johnson , 2016

God's thunderbolt: The Vigilantes of Montana

Ruffians rule and murder is tolerated in the Alder Gulch gold fields during the winter of 1863-1864. Daniel Stark, lawyer and radical abolitionist, fears he will not survive to take his gold home to New York and redeem his family from the disgrace of his father's embezzlement and suicide. When a friend is murdered, Dan prosecutes the suspect, whose five lawyers are Confederates. When the trial reveals a widespread criminal conspiracy, Dan joins Union and Confederate sympathizers united in a determination to establish law and order where there is no code of law nor reliable law enforcement. Going against everything in his training and personal beliefs, Dan helps to form a Vigilance Committee and serve as its prosecutor. Then he faces the horrible prospect of hanging the husband of the woman he loves.
Published: June 27, 2008
ISBN: 978-1419697098

In this third novel of the Vigilante Quartet, lawyer Daniel Stark, the hero of God’s Thunderbolt and The Devil in the Bottle, rescues a man from drowning when the ice breaks on Alder Creek. Recovering, he informs Dan that he represents the Bank of New York and was sent by Dan’s autocratic grandfather to bring him back with his gold to pay the debt Dan’s family owes the bank. Dan delays his return as long as he can. Not only does he not have enough gold to pay the debt in full, he does not want to leave his common law wife, Martha, unprotected for fear her brutal first husband will come back. When at last he returns to New York, he finds that Grandfather has made a pledge to the bank: if Dan cannot repay the loan in full, he will be forced to stay and work in Grandfather’s law firm until the debt is repaid. Seeking a quick way to get enough gold, he takes up trading in the Gold Room on Wall Street where fortunes are made — and more often lost. Where the rising price of gold triggers Confederate sympathizers’ singing raucous choruses of “Dixie.” And President Abraham Lincoln has said he “wished all gold traders were shot in the head.”

The Devil in the Bottle

The Devil in the Bottle, Book 2 of The Vigilante Quartet, tells of Joseph A. “Jack” Slade’s challenge to the Montana Vigilantes. March 1864. Vigilantes ended the reign of terror in Alder Gulch a month earlier. To keep the peace they established a “People’s Court” to administer justice backed by their enforcement. Yet they have no jail because miners will not be taxed to pay for one. “Who needs a jail,” is the attitude, “when we have the Vigilantes?” But the Vigilantes have only one sentence: death by hanging. After being fired from the Overland for destroying army supplies at Fort Halleck in a drunken binge, Slade settled his family near Alder Gulch in the fall of 1863. Friends warned him that the Vigilantes will not tolerate his rampages. Slade’s craving for booze and fun comes more often, and his pals are happy to egg him on. The Vigilantes use all their powers of persuasion to convince Slade to stop drinking. Not even Daniel Stark, the Vigilante prosecutor, can make him see reason. When the judge of the People’s Court writes out a warrant for Slade’s arrest, one of his pals snatches it away and stomps on it. Slade laughs. The Vigilantes, he tells them, are “all played out.” Dan and the other Vigilantes face a horrible dilemma. If they yield to Slade, he rules and the criminals they ousted so recently will return to terrorize honest people. Without a jail, only one solution is available to them. But Slade has committed no capital crime.