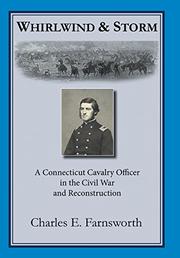 This spotless debut is a personalized account of the Civil War years and a work of significant original scholarship. Farnsworth is a lawyer by training, but if this were a thesis, his meticulous analysis of previously unexplored primary source materials and extensive background research could earn him a degree in history. He mines a family heirloom, the papers of his great-grandfather Lt. Col. Charles “Charlie” Farnsworth, born in 1836. Charlie, an ambitious young Norwich, Connecticut, resident, skipped college to pursue business and gold prospecting. After war came, Charlie volunteered and used family connections—his father was Gov. William Buckingham’s personal physician—to win promotions. He led a battalion, was wounded and recovered, rebuilt an Army base in Baltimore, returned to battle and was captured. After eight months in Richmond’s Libby Prison, he was paroled, demoted and honorably discharged. He broke off an engagement, married his true love, and used connections to President Abraham Lincoln to become one of the first Northern investors to enter Reconstruction Georgia, where he started a commodities exchange and rice plantation. In 1867, with his wife seven months pregnant, he drowned at age 31. Charlie’s impetuous temperament, outspoken manner, social position and extensive documentary record create a unique lens through which to view the times. Numerous books stitch together “voices” culled from soldiers’ letters, but few capture entire lives. Full biographies usually feature top military or political leaders. Yet Charlie, though he ranked high enough to have well-known connections, still retains a sense of the Everyman. Farnsworth’s supple narrative of Charlie’s life, including black-and-white photos, illustrations and maps, takes up less than a third of the book. The rest includes the appendix, nearly 500 footnotes, a bibliography of 100 secondary sources and an index. Farnsworth consistently places Charlie’s travels and observations in the context of contemporaneous events and mainstream historical opinion, all while telling the story unsentimentally, highlighting strengths and flaws. The entire trove of 135 personal letters, diary entries, and other documents by or about Charlie appear in the appendix, with Farnsworth’s comments about each. Reading them makes his preceding synthesis all the more impressive.