Charles Henderson Norman is a former Methodist minister -- and a former bank teller, college mathematics instructor, pizzeria manager, furniture mover, retail clerk and manager, quarter horse breeder, public and private school classroom teacher, caregiver for the elderly and disabled, and more. He converted to Judaism at the age of 50, and presently works as an audiobook narrator and public school substitute teacher. His second marriage to the former Lynell Moses (!) Bond is his own Promised Land; he is happier now than he has ever been. This book took seven years to research and write, and Charles considers The Fire in the Rock his life's work. 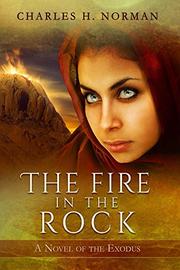 The Fire in the Rock

Debut novelist Norman humanizes the Exodus story in a moving account that takes some liberties with the traditional biblical tale.

Blind, aged Tzipporah lives alone in a little house at the foot of Mount Nevo in Jordan, feared by her neighbors who nonetheless supply her with food and drink. One day, Zev, a Kushite, shows up wanting to hear the true story of Moses, and Tzipporah obliges. The novel is mostly one long flashback; in it, she, a Midyanite, lives with her family at the foot of the Mountain of God, aka Mount Sinai. She meets Kisil, aka Moses, a self-imposed wanderer who left Egypt and is torn between his royal upbringing and his birth as an Avru (Hebrew) in the slave quarters. He has wandered the Earth and seems to know everything, but he’s also very quiet, modest, and riven with doubts and insecurities. He and Tzipporah marry, have two sons, return to Egypt, and, as Exodus relates, lead the Avru from bondage through the desert—a trek that’s not just physically trying, but also complicated by stiff-necked, restive Avru people. The climax of the story is Kisil’s attempt to commune with the unknown God who lives in the fiery mountain; this is a well-known story, but Norman puts a special twist on it. The Israelites become believers and, after many more travails, come to the land of Canaan. Readers last see Kisil trudging up Mount Nevo to meet his peaceful death; at story’s end, Tzipporah follows. This is a Bible-based recounting that’s also a powerful, focused love story that may perhaps be more appealing to seekers than believers. The characters, particularly Kisil and Tzipporah, are human and memorable, and the noble Yisro, Tzipporah’s father; the gentle giant Gamba; and the wily servant Desan keep the pot stirred. Norman also provides an engaging, thoughtful afterword regarding the story’s historical and archaeological details.

Watership Down by Richard Adams

"Of course it is happening inside your head, Harry; but why on Earth should that mean that it is not real?"

I cook an awesome omelet.

To do the right thing; to be the best man I can be.

The Fire in the Rock: A NOVEL OF THE EXODUS: Kirkus Star