Charles was born in New York City where he attended an arts and music high school in Manhattan, and later, Columbia University and The New School for Social Research.
A former United States Marine, Charles was, before turning to writing full time, an advertising agency creative director. His career, aside from his start in on Madison Avenue, eventually took him to Boston, London, Paris, Milan, and San Francisco. He is the recipient many advertising awards including the prestigious Clio.
His books include “4-F Blues: A Novel of World War ll Hollywood,” winner of the PEN Award, and the humorous “I’ll Get Right Back to You and Other Annoyances.: All the Things that Can Screw Up Your Day.”
Charles’ most successful book to date is the nonfiction “Don’t Let Your Kids Kill You: A Guide for Parents of Drug and Alcohol Addicted Children” which has sold over 100,000 copies worldwide.
A frequent radio and television guest, he has had interviews on all the major television stations in the USA as well as England where he has been featured on the BBC many times.
In connection with his work as president of the Inner Light Foundation, he is often invited on radio call-in shows as a noted dream interpreter and numerologist.
“Leaning on Thin Air” Charles’ newest book has, according to Kirkus Review, the intrigue and character of classic noir. It’s corporate insanity of the highest order.
The father of three sons, Charles, a former resident of London and Cambridge, England, lives in Sonoma County, California.

“Mad Men never had this kind of fun.”
– Kirkus Reviews 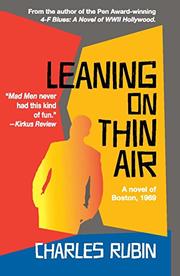 Rubin (I’ll Get Right Back to You and Other Annoyances, 2010, etc.) takes on the summer of 1969 from an unusual perspective: that of a maverick ad writer.

“Who has time for Vietnam?” asks Bob Bronson, and who can blame him? Tensions may be high in the streets of Boston, as protests against the Vietnam War become more violent on a daily basis, but Bob’s personal life takes all his attention. Having lost his job and burned bridges with the entire Boston advertising world—as well as most any of his former friends—he’s adrift. His family isn’t much help either. His wife, Allie, seems to do little besides drink heavily and mind the children. No one can say whether his life went wrong when he left New York for Boston, or even earlier, but it doesn’t look like there’s much left to salvage as the novel begins, no matter how talented a writer he is. While Bob’s stubbornness had been a problem for him before, it might be his only hope now. He gets a new job offer he can’t refuse and finds himself caught up in something much bigger than himself. It’s corporate insanity of the highest order—politicking, affairs, and even a murder. Bob is in well over his head, but seeing how he gets himself into and out of trouble—and how he catches his breath in between—keeps the story fresh and entertaining. The narration also adds a lot to the book’s attraction: Bob keeps the reader firmly rooted in the novel’s present, and his voice lends the novel all the intrigue and character of classic noir. And while Bob may not be the most likable character, his principled stand—and many temptations—do give him a certain roguish charm. The book’s only real weakness is an occasional sloppiness when it comes to editing. But most readers will likely be too enthralled to notice a few errant punctuation marks.

Mad Men never had this kind of fun.

This is a story of the way it was in Los Angeles of 1942. The war was on and millions of young men were answering the call to duty. Many more wanted to join up but for their 4-F status (a classification for men not physically fit for service). Which was the case with the main character, Tom Driscoll, a Hollywood stuntman who was kept out of uniform because of a heart murmur. And even though Tom risked his life daily by performing death-defying stunts, Uncle Sam wouldn't allow him to fight for his country. Tom did, however, through a series of hair-raising events on the homefront, serve his country in a way he never expected. 4-F BLUES is a sentimental journey back to the glitter of Hollywood, 1942. It takes you into the studios and into the lives of the stars. It's full of history and full of surprises.

Don't Let Your Kids Kill You: A Guide for Parents of Drug and Alcohol Addicted Children

Defies the myth that parents must sacrific themselves. Instead, shows them how to reclaim their power, balance, happiness...and lives. When kids turn to substance abuse, parents also become vicims as they watch their children transform into irrational and antisocial individuals. This harrowing scenario finds parents buckling beneath the stress--often with catastrophoric consequences: Divorce, career upsets, breakdowns and worse. "Don't Let Your Kids Kill You" is a landmark work that dares focus on the plight of the confused, distressed parent and not the erring child. It sets aside any preconceived ideas that parents are to blame for what is essentially a full-blown global crisis. Drawing on interviews with parents who've survived the heartbreak of kids on drugs, combined with his own experience, Charles Rubin provides practical advice on how parents can help themselves and their families by first attending to their own needs. Liberation begins when you open this book.

I'll Get Right Back to You and Other Annoyances

This book is for anyone who has ever been pissed off, ticked off, ripped off one way or another, irked and annoyed. 42 candid, comical, often poignant, often chilling looks at the absurdities you face daily.
ISBN: 7980967979090