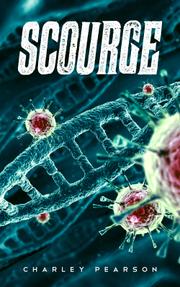 Pearson (The Marinated Nottingham and Other Abuses of the Language, 2016) offers a sci-fi thriller about a virus that threatens humanity.

Stacy Romani spent a good deal of her youth at her family’s chemical factory. It was there that she displayed a keen ability for scientific research. She grew up in a tightknit Roma family, and their wealth and distrust of outsiders allowed Stacy to pursue a career in science without any distractions. She would one day become an “elite of biochemistry,” although she could hardly anticipate some of the challenges that she would eventually face. One of her fellow elites is a man named Aatos Pires, who, much like Stacy, stood out as a child due to his advanced intelligence and, also like Stacy, doesn’t always have the best social skills. The two had once met years ago, as children; when they meet again as adults, it’s during a time in which a powerful virus is spreading through the population. As a woman working at the Centers for Disease Control describes it, the virus “doesn’t inhibit the immune system. It eats it.” To make matters more troubling, the virus was concocted by Aatos’ colleague in order to forward the goal of the “peaceful extirpation of the human species.” It turns out that there are lots of people around who want to put an end to all human life. And although the reader knows that Aatos is not to blame, the authorities still find him suspicious. Although the premise sounds simple enough, the narrative takes a while to get to the heart of the matter. Stacy’s and Aatos’ backstories are lengthy and not quite as thrilling as an illness that could annihilate everyone on the planet. Although it’s revealed that Stacy once discovered a virus as a youngster, thanks to an electron microscope, a fierce commitment to the scientific method, and a can-do attitude, both she and Aatos play better as dedicated adults than they do as precocious children. Other characters include journalist Joshua Grimm, who has his share of insights, such as his disdain for broadcasters who seek comments from people on the street (“Who seriously thought random civilians had anything meaningful to contribute?”), but his mission to report only slows the progress of more pressing narrative material. Although this virus-threatening-civilization story loses focus at times, it’s imaginative and full of action at its best. The story is at its most endearing when it explores hard science, as when Stacy and Aatos investigate “the viral RNA and its protector protein.” These portions give the reader a glance at how real investigators might tackle such a thorny problem—even if they didn’t already have a track record of tackling such difficulties from a young age. Pearson also makes sure to throw in plenty of flying bullets along the way, and he’s continually shifting the quirky plot into places that are both surprising and fantastical.

Despite a slow start, this tale eventually succeeds with its scientific intrigue and decisively high stakes.

RIPPLE IN THE SEA

An American teenager becomes a wartime spy in Pearson’s historical YA novel.

In 1941, Japanese American high school senior Kristy Hara lives a quiet life in Alameda, California, sketching the U.S. Navy ships that sail into San Francisco Bay. She loves her professor father but can’t stand her psychologically abusive mother, who, at one point, euthanizes the family dog and makes Kristy watch. The girl decides to run away to Los Angeles to work as an actress in propaganda films, but on her chosen day of escape, the Japanese military launch a sneak attack on Pearl Harbor. When she gets back to her house, she sees the FBI arresting her parents; it turns out that her mother has been sending Kristy’s ship sketches to her “cousin” in Osaka. Kristy avoids capture by the feds and escapes the city aboard an Argentine freighter, but she’s consumed with rage and guilt: “For the rest of my life, I would never be able to forget what my mother had done. After everything my father had worked toward, everything the entire Japanese-American community had done to fit in and gain acceptance in this new country, my mother had ruined it all.” When her freighter is sunk in Japanese waters by an American submarine, Kristy finds herself a guest of Navy Lt. Jeremy Maison of the USS Barracuda. She manages to escape authorities for a second time, but not without making Maison a promise to atone for her mother’s betrayal by spying on the Japanese. After she washes up on a Korean island, she hatches a plan to assist the Americans who are being held captive in a prisoner-of-war camp. Will it be too much for an inexperienced teenager to handle?

Pearson’s protagonist is full of angst, energy, and personality. The author effectively captures how the anti-Japanese sentiment that arises after Pearl Harbor damages her sense of herself and of her country: “I soaked in the anger, the fear, the sheer loathing,” she thinks. “Was this the war, or was this how they had always seen my family? Had every greeting, every wave, every sign of goodwill been a lie?” On the whole, however, the novel’s plot comes off as fairly ridiculous. Kristy’s behavior rarely feels believable, and the story doesn’t offer any groundbreaking insights into the dire situation that many Japanese Americans faced during World War II. The politics surrounding Kristy’s need to atone for her mother’s actions are troubling, as she blames it, at least in part, on an “eastern honor issue.” After she becomes an agent in the field, a Japanese officer sexually assaults her, and the book tips into exploitative territory. It’s unclear who the intended audience for this book is or what messages Pearson wishes them to take from it. The story of a Japanese American teenage girl in 1940s California who becomes a secret agent should be a compelling one, but Pearson’s attempt to provide it here is difficult to see as anything but a tone-deaf misfire.

An awkward World War II thriller that stumbles in its presentation.

The Marianated Nottingham and Other Abuses of the Language

It's about time someone told the truth about Robin Hood! So this is the Sheriff of Nottingham's side of the story. I mean, here's this poor sheriff trying to found the world's first national park to protect the deer, and Robin Hood hunts. And don't even get me started on King Richard. (That one's a full-length screenplay. Then add 24 shorts, from stories to skits to deranged doggerel -- not to be confused with poetry -- strict rhyme, solid meter, and no redeeming social value. Note: published on April Fool's Day.) Won Best Anthology at the 2017 Killer Nashville writers conference.
Published: April 1, 2016
ISBN: 978-0997299304