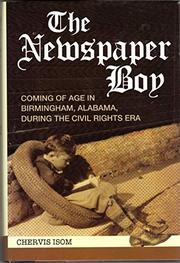 A white Southerner describes his teenage journey to racial tolerance in this debut coming-of-age autobiography.

Attorney Isom grew up and attended college during the 1950s and ’60s in Birmingham, Alabama—a city that was home to some of the most notorious racism of the civil rights era, peaking in 1963 with Commissioner of Public Safety Bull Connor’s violent enforcement of segregation and a church bombing that killed four black children. That backdrop makes Isom’s personal story even more remarkable. As a teenager, he was fired up by the racist views of his society, particularly those of famous segregationist and Klansman Asa Carter, after the U.S. Supreme Court’s Brown v. Board of Education decision in 1954. However, he was slowly swayed the opposite way by the kindness and “question everything” philosophy of the Millers, two Yankee transplants on his paper route. It’s an iconic, real-life struggle, as Isom made a moral choice between the devil and the angel on his shoulders. His memoir also features an intriguing subplot regarding his father, Hewlett Chervis Isom Sr., a kind man who was once sickened by having to kill a chicken for dinner; he questioned his own prejudice, too, like his son, but he couldn’t quite make the leap that the author did. Some passages will flesh out readers’ understanding of bus segregation by detailing the elder Isom’s experiences as a Greyhound driver. One tends to think that Rosa Parks protested, African-Americans boycotted, and bus segregation ended—but readers soon learn that the reality was more complicated than that. Other childhood memories, unrelated to Isom’s internal struggles, will also keep readers’ attention, such as a time on his paper route when he encountered a customer that would make Blanche DuBois seem like a model subscriber.

A touching, heartfelt, and amusing book that provides a wonderful personal perspective on a period of historical and cultural change.

The Power and the Glory

I have been a lawyer for over forty years, but always wanted to write. Now, I'm turning to my second career with passion and want to be a part of the writing community.

Public Speaking [ I have avoided to the extent I could speaking in public because of stage fright. But this year in marketing my book I have come to enjoy public speaking.

THE NEWSPAPER BOY: COMING OF AGE IN BIRMINGHAM, ALABAMA DURING THE CIVIL RIGHTS ERA: Kirkus Star

THE NEWSPAPER BOY: COMING OF AGE IN BIRMINGHAM, ALABAMA DURING THE CIVIL RIGHTS ERA: Named to <i>Kirkus Reviews'</i> Best Books, 2015