Connect with Christian A. Brown

Bestselling author of the critically acclaimed Feast of Fates, Christian A. Brown received a Kirkus star in 2014 for the first novel in his genre-changing Four Feasts Till Darkness series. He has appeared on Newstalk 1010, AM640, Daytime Rogers, and Get Bold Today with LeGrande Green. He actively writes a blog about his mother’s journey with cancer and on gender issues in the media. A lover of the weird and wonderful, Brown considers himself an eccentric with a talent for cat-whispering. 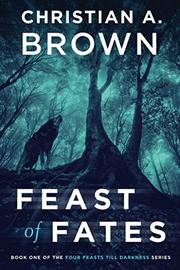 In this rousing epic-fantasy debut, two unlikely lovers forge a bond in the midst of a war between immortal kings.

The city of Eod, in the land of Geadhain, is home to Morigan Lostarot, the handmaiden of a reclusive sorcerer. While shopping for supplies one day, she stumbles into the shop of a blacksmith named Caenith. His bestial manner shocks and allures her—and it intrigues her even more when he reveals himself to be a werewolf. He then helps unlock her latent psychic talent, but the deluge of other peoples’ thoughts and memories threatens to cripple her, so she consults with her magik-wielding boss, Thackery Thule. Meanwhile, Magnus, the Everfair King, has become possessed by a dark, virulent force, and he suspects that his brother, Brutus, is responsible, so he marches with an army to his brother’s kingdom in search of answers. This leaves Queen Lila to rule Eod, and she begins her own investigation by summoning Thackery, who hasn’t told Morigan just how famous a sorcerer he is. At the same time, in the wretched land of Menos, the covetous Gloriatrix schemes against Magnus and Brutus in a bid to rule as a Black Queen. It would have been difficult for Brown to present a more sensual, or satisfying, debut. His motifs run the epic-fantasy gamut, from ancient forests pulsing with life to malevolent phenomena looming in the depths of space. His excellent prose, however, truly sets this book apart from the fantasy herd. Every page crackles with images full of vibrant emotion, such as the “miracle of Brutus’s horde, dusted in frost and as still as a portrait of war.” There’s also an erotic heft to the author’s writing during romantic moments; for example, Caenith tells Morigan that perhaps “the world worked slower for you, so that it might savor your beauty, as I am.” Elsewhere, readers experience Eod’s magical opulence, which contrasts fabulously with Menos’ repugnance. After a cataclysmic finale, the heroes rest up, possibly for a sequel.

An unmissable fantasy tale that marries gorgeous prose to a lavishly detailed plot.

Too many! Possibly the Earthsea Trilogy.

Contributor for The Mary Sue, 2015