Christian Kachel is a Long Island, NY native and current resident of Northern Virginia. While attending the University of Maryland- College Park, the events of September 11, 2001 inspired him to join the U.S. Army ROTC program and volunteer for three tours of duty in Iraq and Afghanistan upon his commissioning into the Army Reserves in 2003. He holds three Master's degrees and work in the defense industry.

The Spoils of Olympus has been a 2 1/2 year project that began in a Marriott hotel room in San Antonio, Texas while attending pre-deployment training for a tour in Afghanistan in late 2011. The wars of succession immediately following the death of Alexander the Great have always fascinated him despite being overshadowed in the history books by the life and times of Alexander himself. Many great novels have been written about ancient Greece and Alexander but few fictional works have explored this forgotten era in western civilization where Alexander's generals, who were once allies, battled each other for control of the largest empire on earth.

By the Sword is the first novel in The Spoils of Olympus series and introduces the story's protagonist, Andrikos. The book follows him from an adolescence of criminality and capriciousness to his forced enlistment in the wars of succession; taking him from the battlefields of Asia Minor to the Achaemenid palaces of the Persian Empire. It is his hope readers will enjoy the story while learning about this important time in history. Thank you for your interest!

“An educational yet adventurous novel that will leave readers eagerly anticipating the next installment.”
– Kirkus Reviews 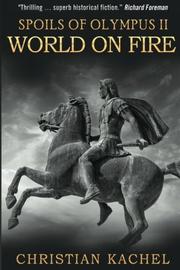 A soldier fights for home and family in this second installment of an epic series.

In Kachel’s (Spoils of Olympus: By the Sword, 2014) sequel, Greek combatant and spy Andrikos and his mentor, Vettias, continue their quest to defend the heirs of Alexander the Great amid a dangerous civil war. After the death of Gen. Eumenes, the two spies must ingratiate themselves with their new leader and former enemy, Antigonus. Andrikos continues to hone his skills as he and Vettias conduct assassinations, plant rumors, and generally attempt to undermine their enemies. While Andrikos navigates a web of political intrigue, he also develops a personal life. He reunites with a woman named Mara only to find out she has given birth to their child, a son called Talos. The couple enjoy a series of clandestine meetings, reinforcing their love for each other, before Andrikos makes his move and wins his family back. But a family can be a complicating factor for a spy whose life is often at risk. When Antigonus instructs Andrikos to bring the remaining heirs of Alexander to their side, Andrikos faces a treacherous mission where he must make choices that could endanger his life and the well-being of his newfound family. Kachel presents another well-researched novel that explores a fascinating but overlooked period of Greek history. His descriptions of military life, especially the intrigue and the battles, are spot-on. He includes a huge cast of characters, many of whom are pulled straight from the pages of history. But the sheer volume of names and alliances can be difficult to keep straight. A bigger problem is the slow pacing of the narrative. Warring generals continue to vie for power with little lasting success and few tangible plot developments. Thankfully, the narrative gains steam toward the end, when Andrikos returns to his hometown and then embarks on his mission to rescue the heirs of Alexander. Kachel continues to skillfully develop Andrikos’ character. Some of Kachel’s best scenes depict his hero’s relatable struggle to balance his personal and professional lives as the young man grows into his roles of spy, husband, and father.

A solid, if somewhat slow, follow-up novel about a Greek warrior and spy. 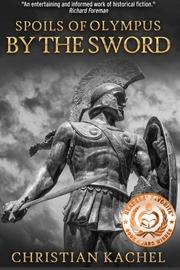 A hero comes into his own in Kachel’s debut work of historical fiction.

Alexander the Great is dead, his empire in chaos. Following his death, former allies fight to gain control of Alexander’s realm, which is divided among his heirs. Andrikos is a young man growing up in Ilandra during this time of violence and political turmoil. Though he admires the courage of Alexander’s military, Andrikos whiles away with ill-advised friendships and skirts the edge of a criminal existence. The young man is forced to leave his hometown following a violent encounter and the painful death of a friend. He seeks refuge with the army in hopes that he will grow into a strong, courageous man who can someday return home. His training and initiation are brutal, yet Andrikos proves himself to his colleagues and superiors. He’s recruited to assist a mysterious organization called the King’s Hand, a shadowy group dedicated to protecting Alexander’s rightful heirs. With the help of his mentor, Vettias, Andrikos soon learns the arts of coercion and espionage, skills requiring a kind of finesse far different from the brute force essential on the battlefront. Accompanied by the beautiful prostitute Mara, the two men travel on a far-flung mission to infiltrate the highest levels of a royal court and to ensure that the rightful heir to Alexander comes out victorious. Kachel’s novel, the first in a planned series, is a thoroughly researched addition to the genre. The accounts of daily life in the Greek army are far from glorified; rather, Kachel presents a realistic portrayal of the violence inherent to the life of a soldier. Though the plot drags at times—specifically during battle scenes—once Andrikos is engaged by Vettias and the King’s Hand, the narrative takes off. Kachel does a wonderful job portraying the development of Andrikos from awkward, immature youth to confident and skilled operative. Kachel brings to life a huge cast of characters and does an admirable job fleshing them out, particularly Andrikos and the complicated Vettias. Thanks to evocative writing and impressive research, the world of the ancient Greeks feels closer than ever.

An educational yet adventurous novel that will leave readers eagerly anticipating the next installment.