Chris was born in Youngstown, Ohio, but has spent most of his life in the Chicago area. A lifelong fan of reading, he wrote his first story at age of eleven titled "The Life of a Grasshopper's Tennis Shoe." A task given to him by a teacher as punishment for his inability to pay attention in class. He embraced the assignment, however, and filled an entire spiral notebook with a tale filled with antics of the grasshopper community. Chris pursued advanced writing at the college level, but subpar grades and lack of attention to the fundamentals caused one of his professors to tell him that he would never make it as a writer. He took the advice and pursued a career in computer software, where he found a lot of success. Then on July 6th, 2006 his life would be forever changed when he was tested and diagnosed with attention deficit and hyperactivity disorder. While there is no cure for ADHD, he was given a treatment plan to help manage the symptoms, which enabled him to pursue writing once again. In 2008 he published his first novel The Dharma Revelation, where it found critical acclaim on Wattpad, and had several favorable independent reviews. In 2010 he began writing a non-fiction piece on ADHD awareness. But he soon realized that the best way to tell his story was in novel form. Thus, The Angriest Angel was born. In 2018 The Angriest Angel trilogy was completed. It has received critical acclaim everywhere that it's been reviewed, most importantly receiving a Kirkus starred review.

“A sci-fi series opener with ADHD as a key component that deserves all the attention it can get.”
– Kirkus Reviews 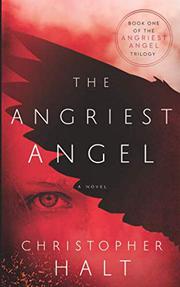 A brilliant, reckless troublemaker appears to be the only person immune to the mind-control camouflage of benign aliens dwelling incognito on Earth.

An intro by the author’s psychiatrist explains that Halt (Pillars of Amorum, 2018, etc.) has ADHD and channels that disability into the protagonist of this opener to a sci-fi trilogy. That foreknowledge sets up expectations of a disease-of-the-week TV movie (or something akin to The Girl with the Dragon Tattoo vs. the Flying Saucers), which prove happily inaccurate. Caelans are not monstrous space invaders but a human-appearing alien race, both technologically and morally advanced well beyond Homo sapiens. Hidden in elite positions in society, they’ve studied humankind with fascination for more than 50 years. A vital distinction between Caelans and earthlings: the aliens’ mental “psy” powers that they can use for protection and persuasion. This ability has kept the extraterrestrials’ secret—until they meet Chase Madison, an unstable Chicagoan diagnosed with ADHD. Chase has a history of violence but is also smart and fearless when it counts. Avery, a beautiful (but terribly naïve) Caelan scientist, and Nathan, her stolid fiance, try to evaluate Chase’s resistance to psy. An even bigger threat, however, is that Caelans on Earth are falling prey to negative traits—jealousy, thirst for power, and especially anger—that their species seemingly overcame eons ago. The Caelan “Regulus,” or leader (the author cleverly substitutes high-minded Latin for a purely invented alien language), having lost his wife, has literally gone mad with grief and is planning the unthinkable. The author’s premise may remind genre readers of Zenna Henderson’s humanistic The People stories. Halt sets up rich, emotional character minefields and conflicts without letting his antihero’s pathology take the focus off the bigger picture. Much remains unresolved at the end (only the beginning of this saga). But readers of international sci-fi who revere (deservedly) the Arkady and Boris Strugatsky classic Hard to Be a God will want to check out Halt’s thoughtful take on what can go wrong when incredible and supremely ethical outsiders try to blend in with the coarse natives. If Chase is a protagonist as volatile as Randle Patrick McMurphy, Halt’s prose stylings throughout are steady, sober, and finely honed, refraining from dropping Hollywood FX whammies in a manner more befitting Cylons than Caelans.

A sci-fi series opener with ADHD as a key component that deserves all the attention it can get.

A well-paced thriller that attempts to universalize the world’s major religions.

The potentially nefarious organization known as ISIS is searching the world for the finest minds in religion, and Caleb Drake, the charismatic genius spearheading the group, has chosen the unwitting Father Daniel Sheppard, among others. Sheppard, an upstart and all-around hip priest, has been told by his deacon that ISIS is an atheistic conspiracy meant to raze the Catholic Church to ruin. It’s a bit far-fetched for Sheppard until he finds his computer being remotely monitored by advanced spyware and receives a desperate e-mail from an old colleague–along with a cryptic data attachment from a recently dismantled and controversial project called PLATO. This scientific effort has discovered the positive efficacy of prayer on physical phenomenon. The author’s clearly opinionated, but regardless of readers’ spiritual bent, this fun thriller will sustain their interest with a diverse cast of religious characters, chase scenes and the odd explosion. The revelatory findings of project PLATO and the shadowy organization of ISIS–with all the attending religious implications–are thoughtfully developed. Unfortunately, the novel’s conclusion attempts to deliver authentic religious revelations instead of a gratifying denouement. Rather than summarizing the narrative through a compelling mystical sentiment, the character Dharma explicitly outlines the revelation in the final pages. It’s as though the preceding chapters were a mere excuse to legitimize this final confused proselytizing–the kind of nebulous theosophy which the book earlier treats with pleasing irony. Halt is inventive though, and his thoughtful efforts make his novel entertaining, if not revelatory.

Perfect for lovers of blockbuster thrillers and religious conspiracies.

Named to Kirkus Reviews' Best Books of 2019: THE ANGRIEST ANGEL

Pillars of Amorum (book three of The Angriest Angel trilogy)

The Emancipation Pattern (book two of The Angriest Angel trilogy)