Doctor Christopher Kaufman, an accomplished author, composer, concert presenter and teacher, has devoted himself in recent years to the creation of multimedia works for family audiences.
These works are stand alone fully illustrated books, and include free audio albums filled with fully produced symphonic music, voice acting and sound design. He also presents beautiful live concert events where the books are brought to life as living books, concert works with orchestra or cinematic ballets.
Doctor Kaufman has a D.M.A from Cornell University and has worked with young people and families for many years. He is an award winning teaching artist and the creative director of The Phantastic Theater - new music and art for people of all ages.
NOTE :) - in earlier editions of some of his works, Doctor Kaufman utilized a punctuation style which reflected the music on the audio album. He has since discontinued this practice as it was difficult to communicate to reviewers, who tend not to take in consideration the multimedia nature of his work. *All extant editions have traditional punctuation.

““A warmhearted, encouraging book about the wonders of imagination.””
– Kirkus Reviews 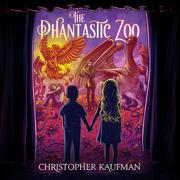 In this illustrated book for children, a brother and sister discover a special exhibit of magical beasts.

Mary and her little brother, Tim, are excited about their school’s field trip to the zoo. For the first time since their parents died, Tim is smiling; he’s hoping to see a dragon, although a friend informs him that dragons are only giant alligators. But alligators are interesting too, and Mary promises her sibling that he’ll see some. Then they find that the alligator tank is closed for repairs. Tim cries, but just then, a tall, strangely dressed man appears and introduces himself as Zitthoona, a magus and Keeper of the Phantastic Zoo. “Would you like to see a Dragon, Tim?” he asks. Playing his flute, the Keeper leads the kids through a hidden entrance. Giant plants, music, colors, and mysterious sensations surround them as they meet first a phoenix, then a mermaid, and then—most thrilling of all—an actual dragon. Each creature has a story to tell and a message for the kids about music, imagination, and protecting the environment. Back at home with their aunt Peggy, the children find a tree that becomes their special place to listen to “music magic.” The text urges readers to email the author for a coupon to download an accompanying digital audio album. Kaufman (The Adventures of Squiggle T. Buglet in the Musical Forest, 2014, etc.) gives children a fantastical experience with his collection of magical creatures who live in a place that’s more like a hotel than a zoo, the Keeper explains. The author presents it all in heightened language that helps build a sense of awe: “The air turned hot and cold as you walked…and in the darkness you could sense ancient powers…and things it was impossible for Mary and Tim to put words to.” The siblings’ affection for each other is sweetly depicted, as well. Kaufman’s faux naïve illustrations have the colorful, flat feeling of pale Matisse paintings, emphasizing the narrative’s air of strange adventure. However, the book’s punctuation becomes distracting with its many ellipses and exclamation points, random capitalization, and sometimes-missing commas.

A warmhearted, encouraging book about the wonders of imagination.

The Chronicles of Prydain

Creating and presenting works of art to people of all ages.

Dancing Night Hawk is Doctor Christopher Kaufman’s epic tale inspired by Native American Myths. It tells the story of young Dancing Night Hawk who must rescue the Ne’ne’me’kay’aa, the Thunderbirds who protect her village, from the Ma’ha’kuk, the evil Dragon Lords who hold the Ne’ne’me’kay’aa captive in their Niagra Fortress. Join Dancing Night Hawk on her terrific adventure! Dancing Night Hawk is a multi-media work. The live performance is like a cinematic ballet, with dance, acting, puppetry, live music and recorded symphonic music. This book, as do most of Doctor Kaufman's oeuvre, comes with a free audio album filled with Doctor Kaufman’s highly accomplished symphonic music, full narration, voice acting and sound design! “The combination of book and album creates an immersive experience, like a living movie in your imagination!”
Published: Jan. 15, 2019
ISBN: 978-0-9980566-2-3

The Adventures of Squiggle T. Buglet in The Musical Forest

Squiggle T. Buglet adventures through The Musical Forest learning music words and playing music adventure games with her teacher friends. In these games, Squiggle learns about music fundamentals and earns a seed pod for each: rhythm, melody, harmony and the family of instruments. She earns these seed pods in order to reach The Mysterious Cave of Doctor Soundartus and make music on his magic music wall. A beautifully illustrated stand alone book, ‘The Musical Forest’ includes a downloadable audio album filled with Doctor Kaufman's award winning symphonic music, voice acting, narration and sound design. 'The Musical Forest' has been performed as a concert work in chamber settings and with full orchestra. For these events, Doctor Kaufman performs with puppets of his own creation as his brilliant daughter, Sofia Rose Kaufman, dances and acts the lead role of Squiggle T. Buglet. “Christopher Kaufman’s ‘The Musical Forest’, builds on the tradition of Stravinsky’s l’Histoire de Soldat and Prokofiev’s Peter and the Wolf, creating a unique performance work that entertains and educates in an original work of art” - Emmy award winning composer Joe Carroll.
Published: May 1, 2015
ISBN: 978-0-9859607-6-6