Grady Harp, Amazon Hall of Fame, Top 100 Reviewers, “…one of best treatises about abuse that is on the market.”

I did everything society said to be happy. I got the degrees: BA, a Montessori degree, and an MA. I married the 'right' men who could 'give me respect and boost my confidence.' First an attorney. Had one daughter. Eight years later, my second husband was a cardiologist from Virginia. The marriage lasted six months. I did things I thought might help society. I sent women to London for abortions before Roe v. Wade. I was active in the peace movement to stop the Vietnam War. With my first husband and I started NORML (the National Organization for the Reform of Marijuana Laws). I had the right jobs: I wrote and produced for PBS, documentaries and TV spots. I won numerous awards. I wrote screenplays to shine the light on inequities and several were optioned. None of this alleviated my pain, shame and suffering from the childhood beatings and sexual abuse that led to my self-abuse. My healing journey began with “Shhhh!”

I’m determined to get this book into the hands of those traumatized by childhood sexual abuse (one in five in the US during the 20th Century). “Shhhh!” will help them clear their own judgement and the fear of other’s judging them thus alleviating their pain and shame—giving them back their dignity.

“... the story's brutal emotional honesty is what keeps it moving.”
– Kirkus Reviews 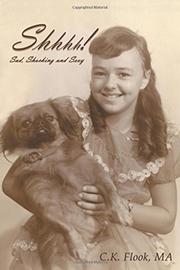 A childhood defined by physical and sexual abuse leads to a tumultuous adolescence in Flook’s self-described “true-life novel.”

Annalyn is the second child of her father’s second marriage. Her mother, once a maid, had married up into a well-off Southern family; as a parent, she’s cold, withholding, and physically abusive, obsessed with keeping up appearances in their conservative 1950s community. Annalyn’s 50-something father is distant and largely uninvolved in his children’s lives. As a result, she receives little affection from either parent. Initially, her grandmother’s home offers a welcome refuge from the cruelty at home, but then a slightly older female relative (herself a victim of sexual abuse) starts abusing Annalyn on her overnight visits. Annalyn’s overwhelming shame and confusion makes her unable to tell anyone about what’s really happening. Flook skillfully depicts the oppressive atmosphere; in one memorable scene, for example, Annalyn recalls playing alone in the barn’s grain bins, letting herself sink into the wheat and then fighting her way out. This recklessness foreshadows her later adolescent rebellions in which she sleeps around, steals cars, and drinks so much that she blacks out. Throughout, the author highlights the narrator’s struggle between her longing to be a “good” girl with her other “shameful” emotions: “I carried primal feelings: no confidence, no self-esteem, shame,” she remembers. The story has abuse at its center but its overarching tale of young women fighting to reconcile society’s expectations with other desires also resonates. It also helps that the author has an eye for detail; for example, the narrator recounts the clothes she wore (“a rosebud pink taffeta, with a matching pink grosgrain band around the strapless top”) and the cars people drove (“a red Alfa Romeo convertible”) with astonishing specificity, effectively drawing readers into the midcentury milieu. However, the story’s brutal emotional honesty is what keeps it moving.

A frank, sometimes-disturbing debut novel that highlights the darkness that can lurk within picture-perfect families.

most recent one: Jeannette Walls

most recent: "The Glass Castle"