She comes from New Caledonia in South Pacific Ocean. Visited by visions and confronted with extraordinary experiences from a very early age, she quickly developed certain gifts such as healing which she practices for 20 years. At the same time, she managed one trade and a restaurant in Ouegoa, in the North of the island. She raised three children and she began to write her fisrt book in 2012. Intitled "In Your Name, I Write", this work discloses her such - an unknown equation - and stands as a key witness, through philosophical notions followed by complex issues. It also reveals her ability to transmit and attempt to heal with words. The second section appears as a barely open and abstract nebula that will require everyone to take the time to observe, to think and to re-read until they find the right path. These first two volumes were traduced in English by Michel Pérez, lecturer at the University of New Caledonia. Claire Fukouara wrote a third volume which presents the aswers to questions of the fisrt one, it is not translated into English yet.
Actually, she’s working on the fourth, the subject deals of the ADN.

“The author praises Suprematism, for example, because its abstraction allows for “neutrality of thought.” […]as immersion in this book will clear one’s mind and make one a temporary hostage from the world.”
– Kirkus Reviews 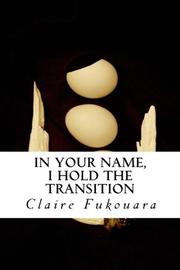 In Your Name, I Hold The Transition

Fukouara (In Your Name, I Write, 2014) presents a new volume of mystic philosophy.

While the author’s previous book was a series of brief, koanlike passages on the subject of transmission and healing through words, this second offering, in her words, “appears as a barely open and abstract nebula that will require everyone to take the time to observe, to think and to re-read until they find the right path.” The volume is broken into three clearly demarcated essays, each pursuing its own thesis. “Suprematism In The Very Idea” deals peripherally with the eponymous Russian avant-garde visual-art movement (and is dedicated to the Suprematist artist Kazimir Malevich), but it focuses more on the difficulty of human perception. The author muses on the shifting, illuminating, and deceiving qualities of light, space, and color (“White is an unmixed and puritanical fragrance in all its written and uttered meanings”) as stand-ins for the entirety of perceived reality. “The Ultimate” is a meditation on an idealized, multifaceted state of interconnection and a call for “the benevolence of everyone, in their own intimate self.” “The Origin” discusses the limiting qualities of the notion of an origin, which she characterizes as “a firewall to the idea of creation.” As in her previous book, these essays are written in a highly abstract, semantically fluid style. Readers trying to pick out a coherent throughline will find it to be guesswork at best, but perhaps the author isn’t trying to provoke traditional reading strategies. The author praises Suprematism, for example, because its abstraction allows for “neutrality of thought.” In this idea lies a possible key to Fukouara’s own writing, as immersion in this book will clear one’s mind and make one a temporary hostage from the world. However, readers may not come away with anything to show for his or her time off.

A tremendously esoteric work of philosophical mysticism that may or may not yield fruit for its readers. 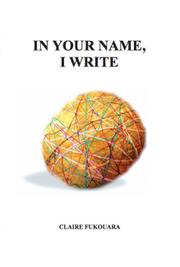 In Your Name, I Write

Fukouara expounds on common philosophical concepts in her debut work.

As explained in a pair of introductions by artist Cillia Darmizin, Fukouara is a mystic and healer from New Caledonia who’s had visions of other worlds ever since childhood. Her book seems meant to offer a regimen of intellectual “healing,” using words as a “means towards relief, towards taking a new stand, towards self-improvement and even self-questioning.” Translated from the French by Michel Pérez, the book is broken down into brief segments; each explores a specific concept, such as “Ego,” “Unhappiness,” or “Chance,” for about half a page. A few discussion questions follow each short essay, such as, “Is chance the projection of doubt?” Interspersed among the topics are photographs of Darmizin’s art, which is generally abstract in style but represents a variety of different types of media. The overall effect is closer to a work of poetry than one of philosophy or self-improvement. Fukouara’s prose seems to be guided by a symbolic sensibility rather than one based on semantic logic, which occasionally results in some aesthetically intriguing ideas (“Light is the innocence of transparency”). However, it mostly creates confusion for readers attempting to find a cohesive philosophical argument. Although Fukouara seems to suggest the existence of a metaphysical system of beliefs or behaviors (“Fire is the twig. It means the permission to reach the mystery of repelling evil”), she never outlines it in any discernable way. If the book’s goal is simply to provide food for thought in hopes of challenging notions of language and perception, then readers may gain something from it. However, if the author is trying to articulate a specific set of instructions for the purpose of “self-improvement and even self-questioning,” it’s hard to view the work as a success. In either case, the book feels like a set of opaque directions leading to an undefined destination.

A dense, abstract philosophical work for the very patient and the very curious.