Claire’s love of writing began at age six when she wrote her first short story – a total of three lines. Later in college, she almost failed Math because, instead of algebraic equations, her notes were filled with poetry and book ideas. To this day Claire is never found far from pen and paper – or a calculator. She now lives in Everett, Washington with her husband Noah, a veteran of the Iraq War. Claire is a firm believer that to tell a story you must listen to one first. Her books and stories are fictional tales based on the emotions and experiences of individuals who have shared their own stories with her. She is passionate about giving a voice to those who are not often heard by creating fictional events and then bringing them to life with true human experiences.

“A harrowing and powerful visualization of war's aftermath.”
– Kirkus Reviews 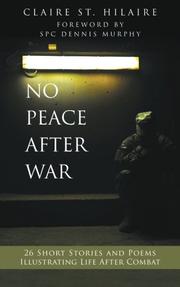 No Peace After War

St. Hilaire’s (Inseparable, 2015) 26 short stories and poems voice the individual agonies of soldiers and those who love them.

Dedicated to members of the armed forces, particularly those who suffer from PTSD or have committed suicide after returning home, the collection presents powerful testimony that war wounds run deep, fester, and remain—whether or not they are shared with others. Although the author offers these tales of trauma as a means of honoring service and lessening suffering, she understands the high stakes. A list of toll-free numbers for suicide prevention organizations and veterans’ groups appears at the end of the book. One strength here is an awareness of the limits of storytelling. Sometimes, despite a ready listener, soldiers refuse to recall their experiences. “I don’t owe you a story,” says a man who prefers to keep his time overseas private. Several tales reveal the irony of giving all to one’s country and then finding more loss and loneliness at home. We learn about psychological struggles, divorce, anger, unpaid bills, and extreme loneliness. The sense of abandonment resonates most powerfully in the first story, narrated by an injured soldier trapped in a cave. He faces a sheer, insurmountable slope of rock and can hear comrades debate his position, but they seem at first disbelieving and then unwilling to help. His position is bleak. As day turns to night, the darkness in the cave expands. An active nightmare scene ensues. The poems are less successful than the stories, as they deal in worn-out tropes. In “Honor,” for example, awkward syntax dilutes what should be a provocative subject: “ ‘To serve with honor’ is a phrase oft spoken, / Repeated over like a record broken.” The last story effectively emphasizes the worth of serving one’s country, but another reality hits hard too, with appropriately strong diction. Every “motherfucking thing on this earth,” a soldier swears, has its breaking point.

A harrowing and powerful visualization of war’s aftermath.

“Moral wounds have this peculiarity - they may be hidden, but they never close; always painful, always ready to bleed when touched, they remain fresh and open in the heart.” Alexandre Dumas, The Count of Monte Cristo

A good friend once told me, “If you want to change the world, tell a story,” for it is through storytelling that cultures develop their ideals. My passion is to be a part of this process.